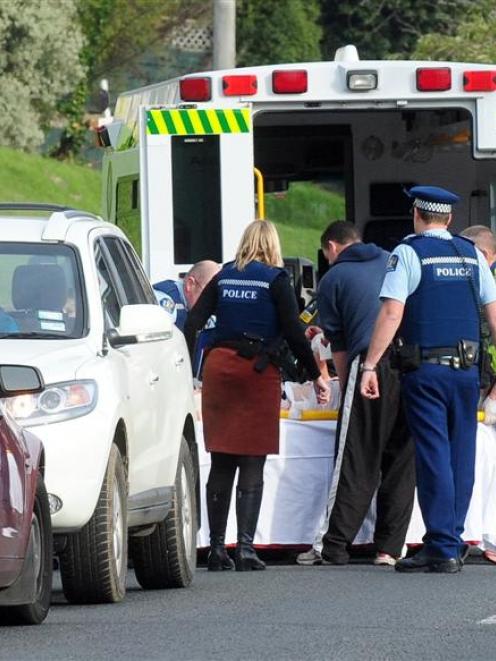 Emergency services treat a woman after a violent domestic incident in South Rd, Dunedin, last month. Photo by Craig Baxter.
A man who split his partner's skull with an axe, exposing her brain, after the blade of a knife he was stabbing her with broke off in her chest, has admitted attempting to murder her.

The 22-year-old victim was in a critical condition after the violent domestic incident at the couple's South Rd, Dunedin, home last month, but is now out of hospital and recovering "incredibly well", police say.

A Dunedin court yesterday heard Jerome Rahiri Folimatama, an 18-year-old scaffolder who had a 3-month-old child with the victim, told police he "just lost it" after she taunted him.

He said he had never felt so angry in his life.

He then picked up a kitchen knife and stabbed the woman multiple times.

When the knife handle broke, he left the blade in her chest and picked up an axe, which he used to fracture her skull, exposing her brain.

Folimatama appeared before Judge Stephen Harrop, of Wellington, in the Dunedin District Court yesterday and pleaded guilty to a charge of attempting to murder the woman.

A charge of assault laid immediately after the July 3 attack was withdrawn at the request of prosecutor Sergeant Steven Armitage.

Folimatama and the woman had been in a relationship for about a year and had a 3-month old child, Sgt Armitage told the court.

An argument developed between them at their Caversham house and Folimatama went to the kitchen, picked up a knife and began chasing the victim through the house.

As she fled outside, he pursued her and began stabbing her about the upper body, inflicting multiple wounds to her torso, face and arms.

He stabbed her in the left side of the chest, breaking off the knife handle. The blade remained embedded in her chest.

The defendant then picked up an axe from a nearby woodshed and used it to strike the victim about the head several times with the blade, fracturing her skull and exposing part of her brain.

As the woman lay on the ground near the front door, Folimatama went inside, collected their baby son and left the property.

The victim's 5-year-old son, who had witnessed the attack, alerted neighbours and they called the police and ambulance.

She also had multiple stab wounds to her neck, left breast, right elbow and right cheek.

Three of her teeth were fractured, her right ear drum was perforated and she had multiple cuts to her skull, bruising around the right eye, under the chin and on her toes.

Folimatama admitted the attack, telling police he "lost it", and had never been so angry in his life. He said he reacted to taunts from his partner.

Judge Harrop remanded Folimatama in custody to September 27 for sentence on what is a "three strikes" offence as it involves serious violence.

At the time, police said it was unbelievable the woman had survived what they described as a case of "gross violence in a domestic setting".

Detective Des Karl told the Otago Daily Times yesterday the victim was doing "incredibly well" given the extent and seriousness of her injuries.

She had been discharged from hospital, but still needed more surgery and was undergoing rehabilitation.

He was not aware of the exact arrangements for her children's care, but said there were no problems in that regard.