The Dunedin City Council is undertaking significant changes to roading in the city’s wharf area to create the bypass for traffic to avoid the city’s one-way system and the new Dunedin Hospital site.

The first stage of a four-stage, six-year upgrade is set to begin later this month in the Wharf St area, a significant access route to and from the central city for commuters from eastern and southern Dunedin suburbs.

Making access easier . . . Traffic lights are to be installed at the intersection of Kitchener and Wharf Sts in Dunedin. PHOTO: GERARD O’BRIEN

Site preparation for work to upgrade the intersections of Wharf St with Kitchener, Roberts and Birch Sts, including the installation of traffic lights at the intersection of Wharf and Kitchener Sts, will begin on October 26.

Council senior project manager Susil Gunathilake said the traffic lights were needed to allow access to and from the harbour basin area, as traffic volumes on Wharf St continued to increase. 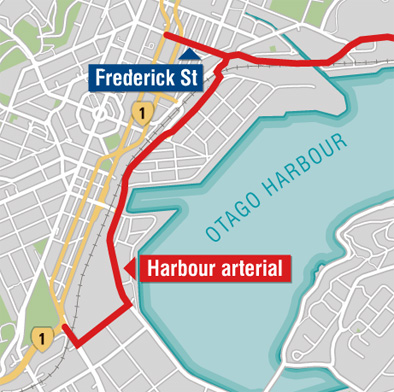 The lights would also work with the planned intersection reconfigurations and turning movement restrictions at the Roberts St and Birch St intersections.

‘‘The changes proposed at the three intersections are expected to provide safety and efficiency improvements for all users of the roads through this area,” he said.

This stage of the arterial route work is to cost $1.6 million and be completed by March 2022.

When the route is completed it will go from Andersons Bay Rd in the south, on to Strathallan St, Wharf St, Thomas Burns St, to the overbridge on to Anzac Ave,  from where traffic will either travel back on to State Highway1  heading north via Frederick St, or turn on to SH88 towards Port Chalmers.

The main east-west route in  St Andrew St will be moved to Frederick St.

The route changes, which are intended to provide a faster, more efficient alternative route through the city during the new Dunedin Hospital build and the four stages of the route upgrade, are expected to be completed by 2027.

Council group manager transport Jeanine Benson said the harbour corridor would become a faster and easier route into and around the central city, and would be better able to cope with the extra traffic expected to use it during construction of the new hospital.

The council’s website says about 16,600 vehicles a day travel along the Wharf St route.

“At the same time, we’re making the area safer and more accessible for commuters who want to travel in alternative ways such as cycling and walking.
‘‘We’ll be widening and adding more sections of shared path and improving crossings.

‘‘There will also be new footpaths, traffic islands and landscaping.”

Detours would be in place and some work would be carried out at night to minimise delays.

Work will stop over Christmas and New Year.

The whole harbour arterial project is to cost $16.6million.

The council’s share is $8.1million and the rest is funded by  the NZ Transport Agency.

At last, looks like they finally worked it out, could have been done years ago.

What a joke, the Ward Street section in particular. This is a light industrial area. There are businesses there that regularly have trucks accessing the businesses including many who park on the street to load/ unload blocking a lane. Add to that that at times logging trucks are queued along this street waiting to get into C3 to be measured. Traffic flows here can already be constrained at peak times. The intersection at Frederick street will cause a bottleneck. In my opinion this route is not suitable to take any significant increase in traffic flows.

100% agree! To expect a large volume of traffic to complete the right turn on Frederick St is asking for more delays and frustration. Why can road engineers not get their collective heads around a decent wide roundabout in Dunedin?

What a mess. As it stands now, turning LEFT from Willis, Cresswell or Bombay onto Thomas Burns at 4:30pm is a nightmare. A RIGHT turn is virtually impossible, in fact it's nearing suicide. There are only two ways to achieve the LEFT turn maneuver, dependence on the good graciousness of another driver slowing to let you onto Thomas Burns (which is rare), or the lights going RED for a pedestrian at the base of the railway over-bridge creating a gap in the traffic. Mason to the Ward roundabout isn't much better because the traffic from Ward St fly in from your RIGHT at such a pace you're risking your neck if you advance onto the round-about. Then when you get to the Jetty St fly over (crawl over), the snarl ups have you in another suicidal position trying to cross over the rail lines to Cumberland, Crawford or Princes. There have been numerous collisions at this location.
Now to suggest that this area will become a major arterial route, what are you guys smoking? Can I suggest to the planners, that looking for ideas playing SimCity in your office probably isn't a solution. Go down there yourselves and OBSERVE the actual situation for you commit the ratepayers to millions of dollars.

Another major snarl-up cause at 4:30pm is the LEFT turn from Crawford onto Jetty. When the left lane of Jetty St is full, ignorant drivers often block the Jetty St right lane which is often empty. However, the traffic grinds to a standstill right up and over the fly over affecting the flow right back to Thomas Burns and Wharf St's. All because ONE driver can often block a lane.
Traffic trying to get out of Birch, Roberts and Kitchener St's also get caught up at 4:30pm, and take risks getting onto Wharf St.
If DCC planning are really going to turn Thomas Burns and Wharf into a major arterial bypass, then they really better have a foolproof plan because otherwise, we're in for a multi million dollar headache of astronomical proportions.