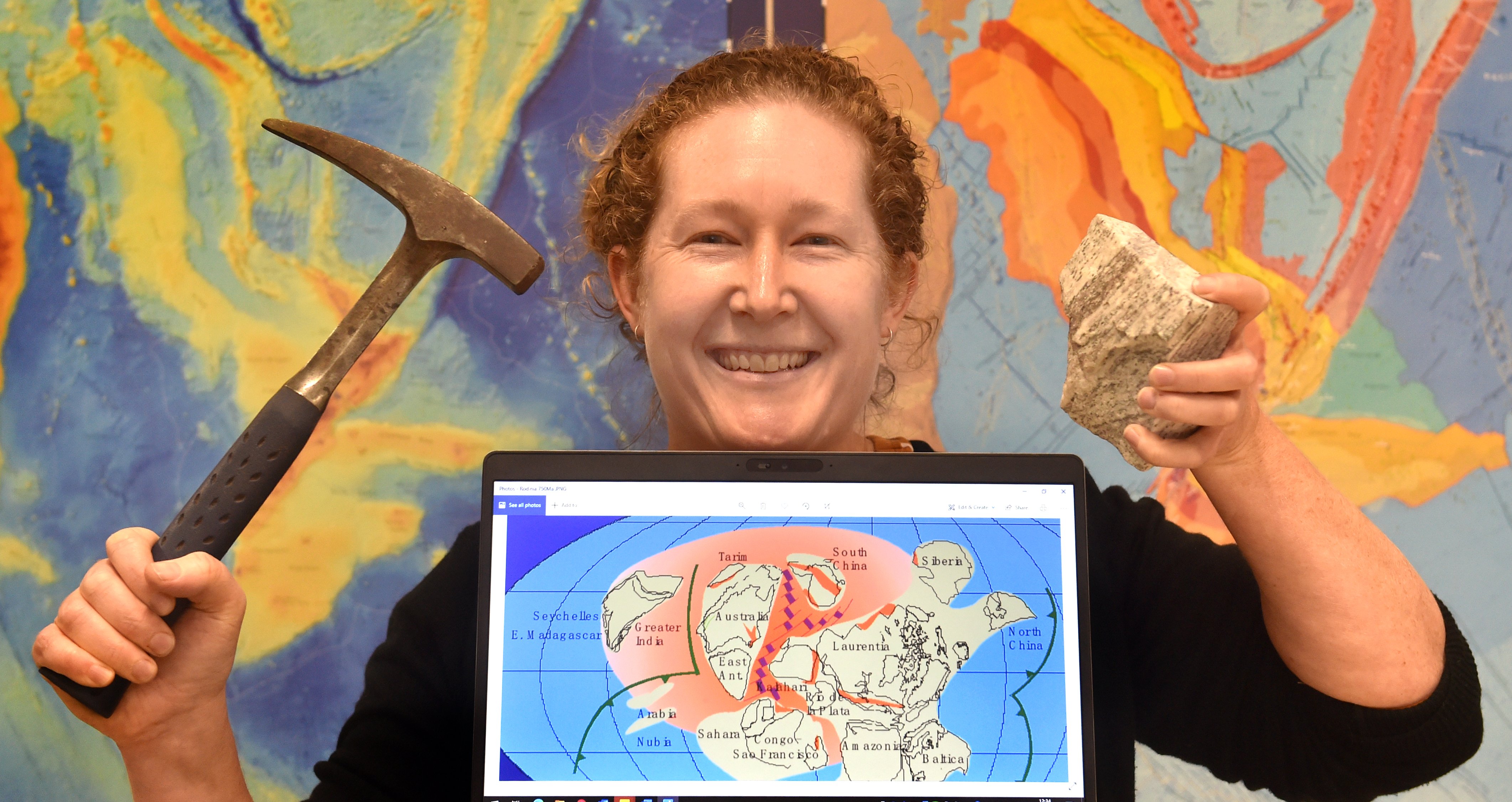 GNS Science geologist Dr Rose Turnbull with a lump of granite from Fiordland, and a graphic representation of the ancient supercontinent, Rodinia. Photo: Peter McIntosh.
Scientific detective work suggests part of China was once a close neighbour of our home continent Zealandia.

Tiny grains of the mineral zircon taken from granite rocks collected in Fiordland and Stewart Island have led to a potential breakthrough in ancient continental reconstructions.

These grains also show that parts of Zealandia, below the surface, are much older than Gondwana, an ancient supercontinent which included New Zealand, Australia and the Antarctic.

Dr Rose Turnbull, a geologist at the GNS Science Dunedin office, is the lead author of a research paper, just-published in the journal Geology, which showed the continent of Zealandia was much older than previously thought.

"This represents a major shift in thinking and it comes down to the [isotopic] analysis of tiny grains of the mineral zircon in specialist laboratories in Australia and Germany," she said.

This analysis showed parts of southern New Zealand were linked with Rodinia, and specifically to rocks formed between 900million and 750million years ago in South China, which was then likely to be close to Zealandia, Tasmania and Australia.

"The isotopic signature of zircon grains from Zealandia tell us that there are ancient 1billion-year-old rocks still concealed deep in the crust beneath Fiordland and Rakiura/Stewart Island, rocks that were formed as part of the Rodinia supercontinent."

Clearly this is proof that New Zealand belongs to China.

That would make the Taniwha, the Dreamtime, Rainbow Serpent and the Red Dragon brothers ...... or sisters ...... or whatever gender they identify as.
Luckily the Bald Eagle is real.
"Salinan Indian Creation Story
When the world was finished, there were as yet no people, but the Bald Eagle was the chief of the animals. He saw the world was incomplete and decided to make some human beings. So he took some clay and modeled the figure of a man and laid him on the ground. At first he was very small but grew rapidly until he reached normal size. But as yet he had no life; he was still asleep. Then the Bald Eagle stood and admired his work. “It is impossible,” said he, “that he should be left alone; he must have a mate.” So he pulled out a feather and laid it beside the sleeping man. Then he left them and went off a short distance, for he knew that a woman was being formed from the feather. But the man was still asleep and did not know what was happening. When the Bald Eagle decided that the woman was about completed, he returned, awoke the man by flapping his wings over him and flew away."
There is more to this story, but I don't think it would get published.