National Party leader Bill English speaking to the press says he wishes the new government well and says National "will be the strongest opposition party that Parliament has seen."

English thanked his party for their hard work on the election campaign and said MMP meant that they do not get the chance to form a government this time.

"We will be the by far the strongest opposition party that Parliament has seen, because almost one in two New Zealanders did support us. However our gratitude is there for everyone we worked with in Government." 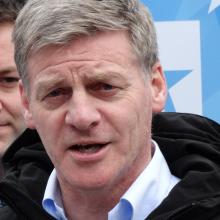 "For a party going into opposition, we're in better shape .. with talent and energy and ideas. A group of people we've geared up to be a Government. We're not going to be ... we accept that."

English said he was satisfied with the negotiations with New Zealand First but the smaller party led by Winston Peters decided to take a different path.

"The result is clear. We accept that result."

He said the issue regarding his continuing to lead the National Party would be discussed in the coming weeks.

The speculation about cabinet posts being a sticking point was "quite wrong", he said.

His advice to Ardern was to take the role very seriously and not take herself too seriously and to build on the positive direction the country had been going in.

Deputy leader Paula Bennett said she was disappointed, but incredibly proud of English and the party and its supporters.

Three weeks after he led National to a strong election result Bill English will take his party on the hard road back to Opposition after NZ First and its leader Winston Peters cast their decision in favour of a Labour-led government.

That decision will have caused heartbreak for English after a 27-year career in Parliament and is the first time the party with the highest share of the vote has not formed the government.

On election night, English stood on the stage at the National Party event with his arms aloft, celebrating the result he had secured for the party. It was a stark contrast from the night of the 2002 election when English broke down in tears after taking the National Party to 21 per cent.

On September 23, English had also claimed the result gave him a "moral authority" to have first go at forming a government - although Peters later rejected that claim.

That result of 46 per cent (58 seats) later shrank to 44 per cent (56 seats) but National was still ahead of Labour and the Greens' combined tally - albeit by just two seats.

The result followed a gruelling campaign as English, 55, tried to counter what he described as the "stardust" of Labour leader Jacinda Ardern by pushing his own record of strength and stability and hammering at the uncertainty around Labour's tax policy.

English first entered Parliament in 1990 at the age of 28 as National MP for the then-Wallace electorate after first working on his family farm in Dipton and then in Treasury after moving to Wellington to be with his wife Mary.

He was one of the so-called 'brat pack' of four - English, Nick Smith, Tony Ryall and Roger Sowry. All still spend a summer holiday together.

English was first appointed a minister in early 1996 by then Prime Minister Jim Bolger as Minister for Crown Health Enterprises and Associate Minister of Education. After the election later that year, he was appointed Minister of Health with NZ First MP Neil Kirton as his associate - a relationship which did not work out.

He remained in that role after Jenny Shipley rolled Bolger, despite English's backing for Bolger. In 1999 he was promoted to the Finance portfolio, working alongside Bill Birch as Treasurer.

Helen Clark's Labour won the 1999 election and in 2001 English was elected party leader unopposed at the age of 39 - a bit older than Ardern is. He led National to a drubbing in 2002 of just 25 per cent.

Some of the responsibility for that was put down to the National Party organisation and English was given some time to try to rally the polling. By October 2003 that had not happened and newcomer Don Brash beat him in a leadership contest.

English was kept on the front bench and given the education portfolio, in which he managed to get successive hits on the Labour government. After the 2005 election, Brash was replaced by John Key and Gerry Brownlee stepped aside as deputy to allow English to take the post.

Although there was initial controversy over English claiming ministerial accommodation allowances for his Wellington home, English rebuilt his reputation as Finance Minister and deputy to Key in the National Governments from 2008 to 2017. In 2014 he stepped away from the Clutha-Southland electorate he had held since 1990 and became a List MP - a step that signalled he would leave Parliament should National return to Opposition.

Instead Key left early and handed English his job, telling National's caucus English had the greatest chance of returning National for a fourth term.

Had Ardern been in the top job for Labour when Key left, English might never have taken it on such was the ghost of his 2002 drubbing.

However, National was still polling strongly and Labour under Andrew Little was flailing in the 20s in the polls.

Despite his long history in politics, English still managed to surprise after taking over as leader, trying to show he was not just the boring numbers man he had typecast himself as.

In his first press conference after National elected him leader English did an about-turn on gay marriage - saying in hindsight he should have supported it.

He quoted poetry by Selina Tusitala Marsh on leadership, saying "lead and dig up the diamonds around you".

And he made some policy changes - including going against Key's pledge not to raise the retirement age by releasing policy to increase the superannuation age to 67, phased in from 2037.

The election result would also have given English a mandate to take National in his own direction.

English had promised change during the campaign, saying there was more money available and signalling changes in areas such as the environment and poverty - even pledging to cut child poverty by 100,000.

Housing affordability would also have to be a focus and health was rapidly becoming an area that needed attention.

While Key had lent National his brand of pragmatism and "compassionate conservatism" from 1999 to 2008, much of that was work engineered by English especially in the "social investment" model.

English's relationship with Winston Peters had not always been easy - English himself described it as "challenging at times". In 1993 English had seconded the motion to expel Peters from National's caucus in 1993. During the campaign, English also urged voters not to give Peters the power to make the decision that has now [dispatched him to Opposition/reinstated him as Prime Minister], saying New Zealanders should "cut out the middle man".

"I got up," English said in the Newshub debate about his comeback after 2002 to be Prime Minister late last year.

Whether Peters turned his thumb in English's direction or not, English could leave with his pride intact.

National's share of the vote was lower than in 2014, but English secured about 20,000 more votes than Key did in 2014. He held National up against a stronger onslaught from Labour than Key ever faced, and ensured that fourth term was at least well within its reach.

His fate was delivered by the whim of Peters - not the voters.