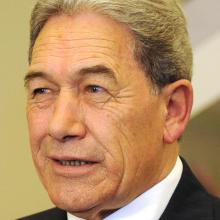 Winston Peters.
The backgrounds of MPs elected to Parliament on September 23 may help New Zealand First leader Winston Peters choose with which party to form a coalition.

The authors of the 2017 MPs Careers Survey, Geoffrey Miller and Mark Blackham, said yesterday National and NZ First had the most in common in the employment backgrounds of their MPs.

But a Labour-Green-NZ First coalition would bring together MPs with the widest range of capabilities and experience.

Mr Miller said the most common careers of both National and NZ First MPs before becoming MPs were in business, property and finance.

``Winston Peters and National are well known for their historically fractious relationship, but the parties' MPs come from remarkably similar backgrounds.''

In the new Parliament, both National and NZ First could claim to be the parties of business. A National-NZ First government would include more MPs with business, education and agriculture backgrounds than a Labour-NZ First-Greens combination.

However, Messrs Miller and Blackham, who have been analysing the background of employment experiences of MPs since 2010, said the differences of career backgrounds in a Labour-Green-NZ First coalition would deliver a group of MPs with broader skills, knowledge and experience.

A labour-led coalition would be more diverse in terms of prior careers for MPs. Labour had significant groups of MPs who came from education, legal and media backgrounds, they said.

NZ First would complement Labour's employment experience in those fields and would add representation of the business community, military and farming, Mr Miller said.

Mr Blackham said the dominance of Labour MPs with experience in central government work, and the experience of Green MPs in activism, was poles apart from the lines of work and everyday experiences familiar to NZ First MPs.

``But this difference could be a strength in a coalition as the parties' combined work experience would cover the widest spectrum of New Zealand's economic sectors.''

Career backgrounds were important because they shaped the thinking and beliefs of MPs, he said.

As New Zealanders tended to align better with people who shared the same experience and backgrounds, it suggested the National and NZ First caucuses would work more smoothly than other options.

Both potential coalitions had no MPs with significant experience related to foreign affairs, Mr Blackham said.