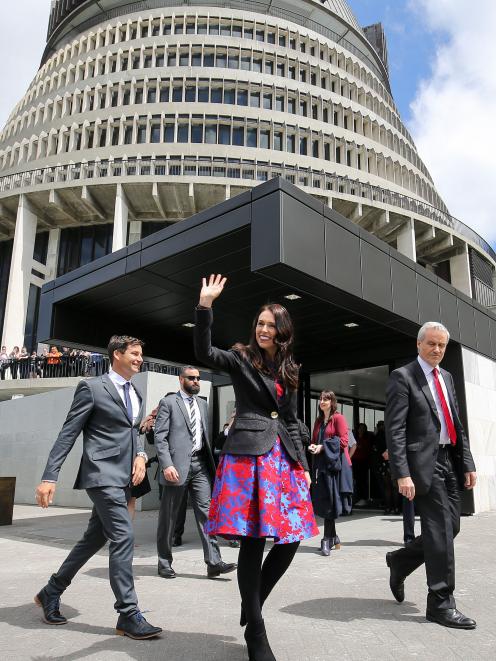 Arriving back at Parliament yesterday afternoon after being sworn in by Governor-General Dame Patsy Reddy, Ms Ardern was mobbed by a crowd of about 1000 cheering and chanting her name, and music by a four-piece band calling themselves the Stardust Stompers, fronted by Joe Lindsay, also a member of Fat Freddy's Drop.

"I think she's great, and I think it's going to be great for New Zealand,'' Lindsay said.

It was the celebration Labour had been waiting nine years to hold.

Just a few hours earlier, a more sombre crowd of about 40 staff cheered Bill English as he made his way to Government House to formally hand in his resignation, accompanied by his wife Mary and youngest son Xavier.

Standing alongside her new Cabinet, Ms Ardern told the crowd she knew not everyone voted for her Government but it would represent them anyway.

Her mother, Laurell, was attending the birth of her second grandchild. Ms Ardern's sister, Louise, gave birth to a boy in London.

Labour's Cabinet met for the first time yesterday afternoon and will meet again on Tuesday, after which the updated version of its 100-day plan will be revealed.

"Some of our 100-day commitments we really need to act quickly on if we are to get the legislation through in time,'' Ms Ardern said.

A focus in coming days will be the Trans Pacific Partnership, which is expected to feature heavily in Ms Ardern's meetings when she attends the Apec Summit in Vietnam early next month.

She will be joined on that trip by Foreign Affairs Minister Winston Peters and Trade Minister David Parker.

"For us a priority, regardless of whether it's TPP or any other agreement, is making sure we have the ability to ban foreign buyers from buying existing homes in New Zealand,'' she said.

Between Labour, coalition partner NZ First and confidence and supply supporter the Green Party there are 31 Cabinet ministers, ministers outside Cabinet and under-secretaries.

Only five have been in government before: Mr Peters, Mr Parker, Nanaia Mahuta, Damien O'Connor and Shane Jones.