And then along came a luxury liner 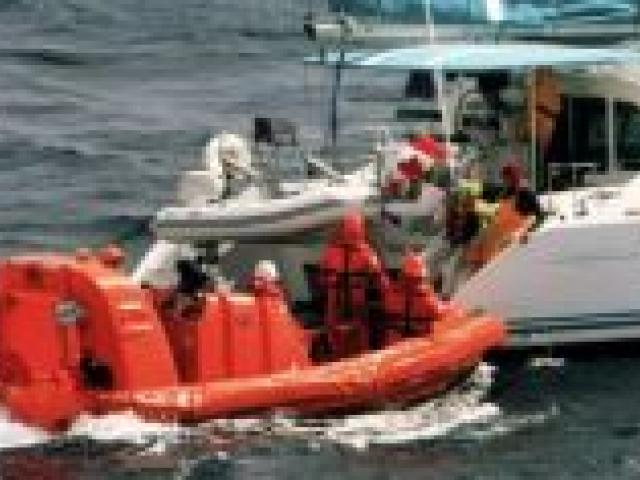 A rescue boat from the Sapphire Princess comes to the aid of crew from Zero Gravity.
How does it feel to be rescued by a floating skyscraper?

Ask Canadian couple Natalia and Brent, who have the 14,450 tonne, multi-storey cruise ship Sapphire Princess and its captain, Nick Bates, to thank for ending their Tasman Sea nightmare aboard the catamaran Zero Gravity.

The Canadian couple, part of a three-person crew, were to have sailed the catamaran around the world and back to their home town of Vancouver.

But just days into their 950 nautical-mile journey from Hobart to Bluff, buffeted by huge swells and high winds, they discovered they had no tolerance for rough seas, and became severely seasick.

In a letter of thanks to the captain of Sapphire Princess - who declined to give the couple's full names - Natalia wrote: ‘‘while at sea anchor, large breaking waves frequently washed over the entire vessel''.

‘‘Despite the seasickness pills, we became progressively seasick and dehydrated during the eight days we were aboard the catamaran . . .''

Capt Bates (60) said yesterday after berthing at Port Chalmers that it was the first rescue Sapphire Princess had carried out in its four-year history, ‘‘but it is something we prepare for every week''.

‘‘It may have been our first rescue but it was a copybook one,'' he said.

Concerned about the couple's seasickness, the skipper of the catamaran had contacted Bluff Maritime Radio on Saturday, requesting weather details, and contact information for New Zealand maritime authorities.

Early on Monday, with the couple's condition worsening and following discussions with Rescue Co-ordination Centre New Zealand, Sapphire Princess, which can carry 2760 passengers and was on the way from Hobart to Milford Sound, diverted 100 nautical miles to the south to assist with the rescue.

Reaching the yacht shortly after 4.15pm on Monday, the cruise ship was turned side-on to the 4m swells to absorb their impact while a rescue boat was launched.

The rescue, completed in less than 20 minutes, was watched by hundreds of passengers on the port side of the vessel.

Capt Bates said once on board, the couple were put on an intravenous drip as they were severely dehydrated from vomiting so much.

The skipper of the catamaran - who had bought the yacht several months ago in Brisbane - declined an offer of crewing assistance, but accepted supplies of fresh bread and ‘‘some liquid sustenance'' for his rerouted journey to Milford Sound.

After arriving in Port Chalmers, the couple flew to Christchurch, where they hoped to book a flight to Vancouver.

Checking on their welfare, Capt Bates said he had laughed when he found out the couple, who had been overwhelmed by Sapphire Princess' luxury hospitality, had been within a couple of days of buying their own yacht before they became seasick.

‘‘Now, they want to book a cruise with us instead.''