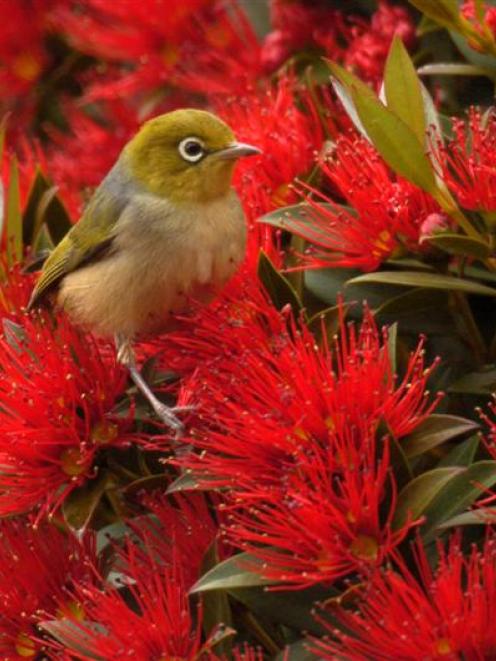 Photo by Stephen Jaquiery.
Preliminary results of an annual survey of garden birds - which show the sparrow is the most common - suggest disease may be taking a toll on silvereyes.

Silvereyes - also known as waxeyes - were recorded in the greatest numbers in 2007, with an average of 10.2 per surveyed garden, ahead of the house sparrow.

But Landcare Research scientist Dr Eric Spurr last year began recording a decline in the silvereyes, with a slump to just 8.9 per garden last year.

He said today early analysis of the 2009 survey showed a continuing plunge in silvereye numbers, to 6.4 per garden.

"Several survey participants commented on this decrease, and some suggested disease was the cause," he said.

This followed reports last year of silvereyes with growths around the bill and eyes, he said.

"The growths could be avian pox, a virus that can be transmitted by contact with infected birds, when they congregate around bird feeders, for example, or by ingestion of contaminated food or water," Dr Spurr said.

Little was known about this disease in New Zealand. "Further investigation is warranted," he said.

Silvereyes migrated to New Zealand from Tasmania or south-east Australia about 1856, and when the first poxvirus was identified in Lower Hutt silvereyes in 1963, scientists said it was possible the birds had brought the disease with them.

Dr Spurr said this year's survey showed more birds in the garden (12.2 per garden) than last year (11.4) and the year before (9.4) and that the house sparrow numbers were higher in the north than in the south.

About 1800 people created the survey through backyard bird watching for one hour in the week to July 5.

Other preliminary results from the survey are the continued increase in tui numbers, a large increase in myna numbers, and a drop in greenfinch numbers.

"These changes could be annual variations rather than a continuing trend and several more years' data will be needed to confirm any long-term trends," said Dr Spurr.

Final analysis of the survey will be released later this year, but the "top 10" bird species in 2009 are: