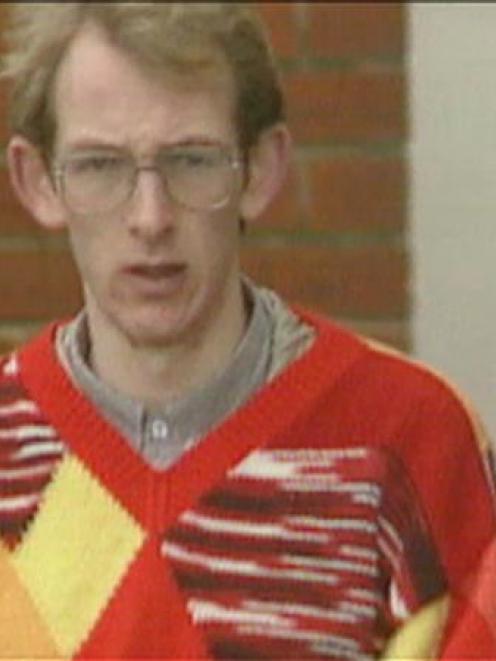 David Bain's jersey was one of the subjects discussed at his trial yesterday. Photo supplied.
David Bain wanted to walk alone at the funeral of his parents and siblings, wearing the brightly coloured jersey his mother, Margaret, had knitted for him.

The jersey was Bain's idea and design, and was created for him by his mother at his request, the High Court at Christchurch heard yesterday.

Margaret later told one of her sisters it was "the most difficult jersey she had ever knitted".

And Margaret "knitted all the time", younger sister Jan Clark said in evidence on the 37th day of David Bain's retrial for the murder of his family.

Bain denies killing his parents Robin and Margaret, sisters Arawa and Laniet, and brother Stephen, all of whom were fatally shot at the family's Every St home on June 20, 1994.

In the days after the killings and before his arrest on June 24, Bain stayed with his aunt and uncle, Jan and Bob Clark.

Both described their nephew as "very relaxed" during discussions about the funerals, but Mrs Clark said he was "very insistent" about what he wanted.

Although he took part in the discussions, he would withdraw when anyone disagreed with his wishes.

At one point, her husband said there would be "a lot of things to be arranged" and Bain replied, "No, I know what we would want", Mrs Clark said.

And when they were talking about the music for the various family members, Bain said he would like to sing.

"But I told him he did not realise what he was asking of himself," she said.

Mr Clark told the court Bain did not want to be a pallbearer.

And he refused a suggestion he should support his grandmother, who was very frail.

"He said he wanted to walk on his own."

Mrs Clark also recounted Bain saying he did not want people wearing black at the funeral, that "we see death as a celebration".

But she agreed with defence counsel Michael Reed QC that people reacted differently to death and dealt with tragedy in their own way.

The Crown case could be completed tomorrow, prosecutor Kieran Raftery told Justice Panckhurst yesterday before the jurors were sent away early.