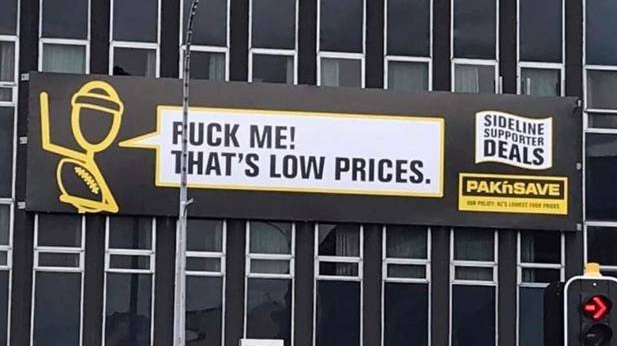 A photo of the billboard, which is on a Rangitikei St building opposite Cuba St, has been shared on a New Zealand Reddit thread along with the caption "Love that pole placement! Keeping it classy in Palmy...".

The billboard is meant to say "RUCK ME! THAT'S LOW PRICES"; however, in the photo the first word has been partly obscured by a pole so it appears it starts with an "F".

Going with a rugby theme, the billboard also has the words "sideline support deals".

Many Kiwis on Reddit found the photo hilarious, some sarcastically claiming that Pak'nSave "knew what they're doing".

Others said it reminded them of other crass advertisements they have seen across the country.

"Reminds me of the orange scaffolding utes I've seen around Palmy that say "Best erections in town", one person wrote,

Another added: "Reminds me of 'Sofa King good deals' — a play on the words "so f***ing good prices".

One American said they didn't understand what a ruck was.

"Imagine in a game of football where the guy with the ball in hand gets tackled and everyone piles in," a person answered.

A Foodstuffs spokesperson told the Herald that Pak'nSave liked to push boundaries in terms of creativity with their advertisements.

"The 'Sideline Supporters' campaign is national and customers can see it on TV, radio, online – the executions differ by channel and throughout the country.

"Regarding the placement of this particular poster, a quick shuffle to the left or right resolves the pole situation.

"Pak'nSave is well known for creating word of mouth with very little budget – feedback from customers is that they are enjoying being Sideline Supporters."

In 2018, visitors to the country were faced with a rather amusing, and possibly offensive, welcome to New Zealand after Auckland Airport Countdown lost its first "O".

The store's sign appeared to have had the crucial letter missing for three days because of an electrical outage, before it was quickly fixed after the Herald reported the problem.

An image was posted to Instagram with the caption: "There's only one place I shop.

Also what people yell when I fall over. Ps @countdown_nz your sign has been broken for 3 days and long may it last."

Do Duc In. Neon signage of St John Polevaunter.

•We have the Truth, the Woy Woy and the lightie light•