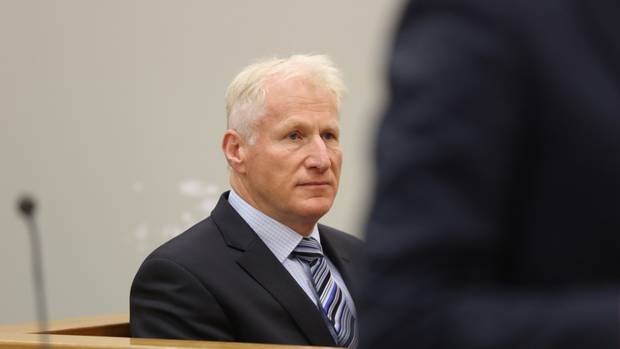 Alfred Keating was sentenced this morning in the Auckland District Court. Photo: NZME
New Zealand's former top military attache to the United States has been sentenced to home detention after being found guilty of planting a hidden bathroom camera at the Kiwi embassy in Washington DC for his own "sexual gratification".

Alfred Keating, the country's former Assistant Chief of Navy, was sentenced today in the Auckland District Court by Judge Robert Ronayne after his nearly two-week trial in April.

The now disgraced former naval officer was found guilty of attempting to make an intimate visual recording of another person when he planted a covert camera in a unisex bathroom at the embassy in the American capital during July 2017.

He will now spend four months and 15 days on home detention for what the judge said was "bizarre and reprehensible" offending.

The motion-activated camera was planted in a heating panel to film his colleagues during their most unguarded moments, with Judge Ronayne saying Keating "did so for [his] own sexual gratification".

Keating, who held the rank of commodore, was the senior defence attache to the US at the time.

In the role, the 59-year-old was the face of diplomacy, negotiating and strategy for the Defence Force (NZDF) to one of New Zealand's most important allies.

He also held full diplomatic status and immunity from prosecution by US authorities, but after the camera was found New Zealand Police began an investigation.

A still image taken by the covert camera showing a person wearing blue latex gloves planting the device. Image: Supplied
The single charge against the former commander of the Devonport Naval Base was laid in March last year and first reported by the New Zealand Herald.

His decorated four decade military career then came to an end after he resigned just two days after pleading not guilty in the same month.

Benjamin King, the deputy secretary of the Americas and Asia Group for the Ministry of Foreign Affairs and Trade (MFAT), said Keating's offending had potentially risked bilateral relationships with the US which can take decades to cultivate.

The actions of individuals can have a "positive or negative impact on country to country relationships", King said in a victim impact statement for MFAT.

He added the relationship with the US was fundamental to New Zealand's prosperity and defence.

Keating, King continued, was the military leader on the ground and in a position of authority and trust.

The former naval officer, abused, that trust in what King described as a "close-knit community" at the embassy.

"Staff and their families were shocked," King said.

Embassy workers were left distressed and felt unsafe by such a violation of their privacy, King said.

Feelings of distrust were compounded when a person of such a senior position was arrested for the crime, he said.

Keating, who first joined the navy in January 1976 and was posted onboard HMNZS Otago, has always denied the allegation and has said he felt he was wrongly charged and the victim of a horrible coincidence. 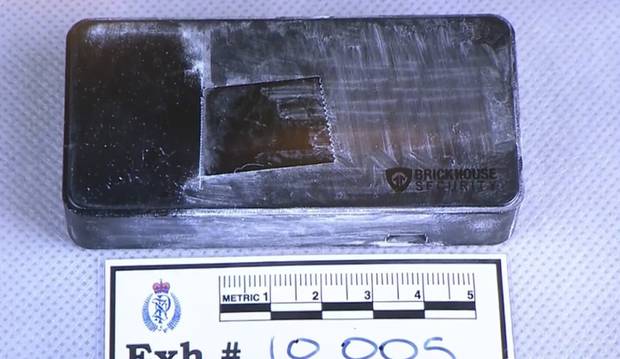 The BrickHouse Security covert camera which was found in the bathroom. Photo: NZ Police
In a statement earlier provided to the Herald he said he was "very disappointed to find myself caught up in this incident".

"I certainly intend to clear my name and expect this will be achieved in time," Keating said.

"You have no remorse whatsoever and you are not innocent," Judge Ronayne said.

"The height from which you have fallen is self-inflicted."

He said the retired commodore is "now known not for his 42 years of service to his country but for his offending".

During the trial, Crown prosecutor Henry Steele said Keating's motivation was to covertly film his colleagues using the toilet by placing the camera in a heating panel.

"This was not an act of espionage," he said.

Today, Steele said Keating abused the trust placed in him by his staff, the embassy and his country.

He described Keating's offending as "highly premediated" and the fact the camera fell from its hiding place was merely good fortune.

The prosecution's case against Keating was primarily based on the recovered internet activity from his computer and DNA found on the hidden camera's memory card.

CCTV footage and swipe card records from the diplomatic outpost were also used by Steele to convict the man who had also served as New Zealand's naval attache and senior technical officer for the navy to the US during the mid-2000s.

Environmental Science and Research forensic scientist Sue Vintiner told the court the DNA found was "10,000 million times more likely " to belong to Keating than another person with the same DNA profile.

She said this was "extremely strong scientific support".

"His DNA is on the SD card because it is his camera and he is the one who put it in that bathroom," Steele said.

BrickHouse Security computer software was also installed on his computer.

Judge Ronayne said today the prosecution of Keating was an "overwhelming circumstantial case".

Mansfield, however, criticised the methods used to test for DNA.

The "low copy number DNA test" is not used by some overseas jurisdictions because of the high risk of contamination and cost, the court heard.

Mansfield also said the police and embassy's investigation after the camera was discovered on July 27, 2017, was "inept and incomplete".

He compared the diplomatic outpost's incompetence to an episode of Dad's Army.

Keating also accused embassy staffer and his driver Mike Waller of being the guilty man during the trial.

Waller had in 2014 bought a device which was identical to that found in the bathroom, but he said it was used in an effort to catch a petty cash thief at the embassy and denied being the person responsible for planting the toilet camera.

"At trial you tried to blame an innocent man ... Publicly accusing him of your crime," Judge Ronayne said today.

Questions by the Herald to the MFAT, which is responsible for New Zealand's embassies, about the investigation and embassy security have gone unanswered.

"We will not be discussing publicly the support offered to staff on this case other than to say the welfare and privacy of staff have been at the forefront of our considerations," a spokesperson for the ministry has said.

"The ministry does not discuss security matters in relation to New Zealand embassies."

During the trial, Judge Ronayne also warned the jurors about some of the classified evidence they would hear.

He said it was "terribly important" that no material or court documents were taken home by the jurors and nothing was discussed outside of the jury room.

A secret witness' identity was also suppressed by the judge for national security reasons.