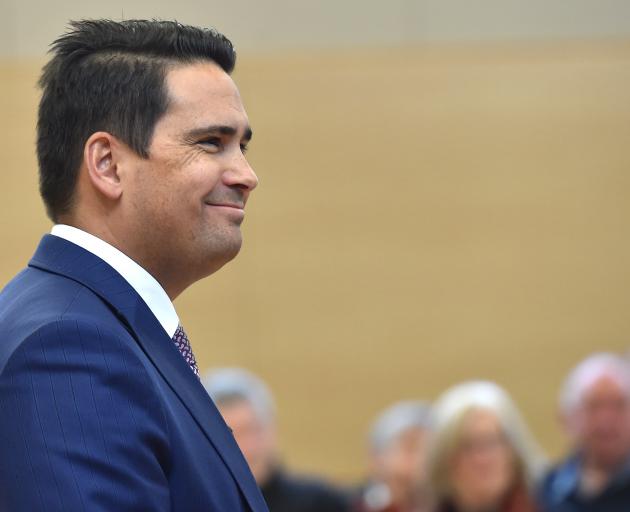 It claims Faafoi offered to help speed things up, but told Kerrison he couldn't put anything in writing.

Bridges told Newstalk ZB's Mike Hosking this morning the Government has one set of rules for celebrities, and another for everyone else.

"Whether it's Derek Handley, Carol Hirschfeld, Richie Hardcore or Jason Kerrison, it does start to look like, under this Government if you're a celebrity you get influence that others don't."

The National leader said if the claims were correct, Ardern needed to show Faafoi the door.

"You've got here a situation where it's a conflict of interest, an abuse of power against the rule book of the Cabinet, to help a close mate.

"If she is a prime minister with the full power of those words, she has to show leadership and act with urgency."

In a brief statement, a spokesperson for National leader Simon Bridges confirmed Minister Kris Faafoi had contacted King in mid-October about the matter.

"He [Faafoi] said that Jason Kerrison's mother needed help on an immigration matter, he asked if Matt could assist.

But the spokesperson confirmed that King's office was never contacted.

King is the Northland MP – the electorate where Kerrison's mother, Jude Kerrison, lives.

In March last year, it emerged then-broadcasting minister Claire Curran had met with Radio NZ staffer Hirschfeld in December 2017 outside of parliamentary business.

She and Hirschfeld claimed it was a coincidental meeting, the pair bumping into each other in a Wellington cafe.

It then emerged in August last year Curran had kept a second meeting off the books. She met chief technology officer candidate Derek Handley in February that year to discuss the job and then failed to disclose the meeting in her ministerial diary.

In December last year it was revealed that social justice campaigner Richie Hardcore texted Prime Minister Jacinda Ardern at the end of October to commend the decision to grant residency to Czech drug-smuggler Karel Sroubek,

The revelation followed weeks of pressure from National MPs about who might have tried to influence Immigration Minister Iain Lees-Galloway over Sroubek, hinting that it might be someone associated with the Government.

Lees-Galloway initially granted Sroubek residency, but has since overturned it.

But Obadiah's residency was rejected, as Immigration New Zealand questioned the legitimacy of their relationship.

Facebook correspondence given to Newshub showed that on October 5, Kerrison messaged Faafoi that he had copied the minister into a post about the decision against his mother and her husband.

"Hadn't heard anything from anyone in your office since I last brought it up," Kerrison wrote.

"Really hope you can help bro."

Faafoi replied, "I will make a call on Monday."

He said that he knew the relationship was genuine as Kerrison travelled to his mother's wedding.

"I will talk to the people that can speed things up," Faafoi wrote.

Faafoi, who has called Kerrison "a close family friend," later asked Kerrison to send him his step-father's surname and Immigration New Zealand file number, which he did.

On October 11, Kerrison checked on the progress being made in the case.

"Any news I can pass on?" he wrote to Faafoi.

Faafoi replied, "Bro I have a plan - but it can't be plastered over FB."

"Unfortunately this kind of thing can happen, so I've enlisted the help of an MP up your way. If I deal with it directly, I will have a conflict of interest."

A few days later, Kerrison texted Faafoi for an update, saying, "Where are we at?"

"Bro it's moving. I can't put anything in writing." Faafoi replied.

When questioned by Newshub journalists yesterday, Faafoi said it wasn't a conflict of interest.

"He came to me and I said I would speak to the local MP, which I have."

A spokesman for Kris Faafoi told the Herald last night that the minister would not be commenting on the issue at that stage.

The Cabinet Manual states that "a conflict may arise if people close to a Minister, such as ... whānau, or close associates, might derive, or be perceived as deriving ... personal, financial, or other benefit from a decision or action by the Minister or the Government."

It also says that "it may not be appropriate for Ministers to participate in decision-making on matters affecting family members, whānau, or close associates, for example,
by: (a) attempting to intercede on their behalf on some official matter".

Newshub said that Prime Minister Jacinda Ardern's office did not know about the messages until it was alerted today by the media company.

A spokesperson for the Prime Minister said she had "clear expectations of her ministers to uphold the highest standards at all times".