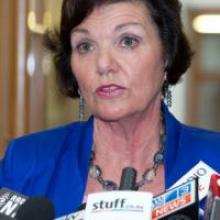 Anne Tolley
A register of child sex offenders will soon be available to government agencies for the first time after Parliament overwhelmingly backed the measure.

But the Government has resisted making it a public register, saying such a move could encourage vigilante behaviour.

Parliament voted strongly in favour of the law change this afternoon, by 107 votes to 14.

All parties backed it apart from the Greens, who were concerned that the $146m measure would take funding away from more effective, evidence-based policies.

Social Development Minister Anne Tolley said the new register was targeted at offenders who were released from prison and ``just disappeared into the community''.

``It's not intended to make it tougher for them, but it is intended to keep track of where they are.''

Tolley said it differed from overseas registers because it distinguished between various levels of offending. People would remain on the register for eight years, 15 years, or for life depending on their level of offending.

New Zealand First supported the bill, but said the register should have been made public, instead of being limited to police, corrections, social services, and Housing New Zealand.

``It is information that parents have a right to know to ensure that they make proper decisions about protecting their children,'' said New Zealand FIrst's social development spokesman Darroch Ball.

Tolley rejected this, saying that many offenders had name suppression to protect their victims.

Furthermore, publishing offenders' names was likely to lead to retaliation by members of the public.

``One poor chap had his house burned down while he was out at work,'' she said.

``He hadn't re-offended, he hadn't caused any risk, but the community found out he was there and burned his house down.

``That's not going to help any of them. In fact, that's more likely to make them reoffend again.''

The register will come into force within a month and will require offenders to provide personal information annually or within 72 hours of a change, such as a new address.

It will apply to anyone older than 18 who has served jail time for a child sex offence, or for non-custodial sentences when a judge orders it.

More than half of the $146m cost will have to be met within existing law enforcement budgets.

``When only 1 per cent of Government funding is spent on prevention ... I call out spending $146m on something that has no evidentiary basis,'' Logie said.

``There is no evidence that this is proven to work and you are taking money from things that do.''