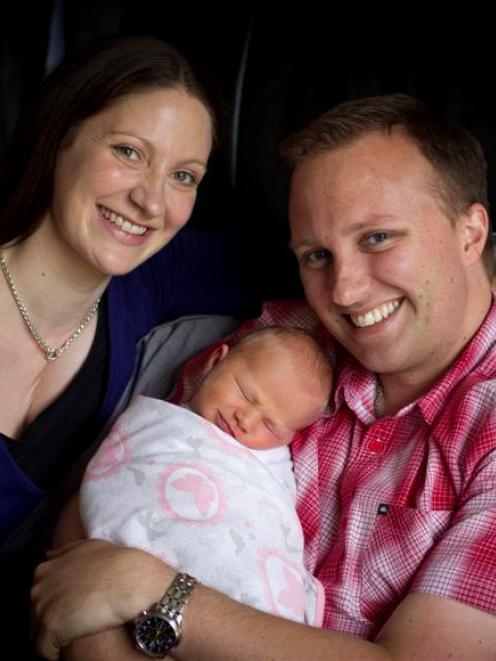 Jared Noel and wife Hannah, with daughter Elise Alexandra Grace Noel, at their home in Te Atatu yesterday. Photo by The New Zealand Herald.
A doctor dying of cancer, whose only wish was to live to meet his baby daughter, has been able to help deliver her and cut the cord after the birth.

Her father Jared Noel (33), a physician at Auckland City Hospital, was able to survive until her birth only after an outpouring of generosity enabled him to buy an expensive drug that slowed the growth of his cancer.

It meant he could not only meet his daughter but help deliver her, at the invitation of his wife Hannah's obstetrician.

''I handed her to Hannah, cut the cord and then I got to have time with her,'' he said.

''It's a surreal experience. It's weird just looking at her and thinking `that's my daughter'.

''There's so many mixed emotions.

''There's the joy of having a child against the backdrop of everything else that's going on.

''It's just sinking in, how blessed we are to be where we are given our circumstance.''

Jared was told it was unlikely he would live to see 2014 after a scan last October revealed the bowel cancer he had battled for five years had spread and was growing rampantly in his liver.

The prognosis came as a particularly cruel blow, as Elise was due in late January.

The couple appealed on the fundraising website Givealittle for donations to help them pay for the drug Avastin, which can slow the growth of cancerous tumours, in the hope it would extend Jared's life long enough for him to meet his daughter.

Their $60,000 target was met within six hours - a record for the fundraising site.

The influx of donations allowed Jared to immediately begin a 10-round course of Avastin.

A scan taken after four rounds revealed the lesions in his liver had either stopped growing or significantly reduced in size.

Hannah (nee Ross), a doctor in paediatrics at Waitakere Hospital who grew up in Dunedin, said she was ''over the moon'' at being able to watch her husband with Elise.

It would not have been possible without the support of family, friends and strangers around the world, she said.

''I knew he was going to be a great dad and he is. And this is a really precious time.''

Elise was conceived through IVF early last year, when Jared's cancer, while still thought to be terminal, was not growing.

Hannah said her focus now was on enjoying the time they had together as a family.

''We're very realistic that that might not be much time.

''We're very hopeful we'll get months. Years would be better, but we'll see.

''In my mind, we're a family unit so we're all together in this,'' Hannah said.

She had rallied friends and family to support her and help care for Elise after Jared's death.

''I don't think you can ever really prepare yourself for that reality properly.

''Having said that, I've been trying to do that for the past five years and he's still here and now we've got a baby.

''So I think I really need to enjoy this time that we have, the three of us, and not focus on the time that Jared's not with us.''

On Wednesday, Jared will begin his 80th round of chemotherapy and his sixth of Avastin.

His greatest hope is to survive long enough for Elise to have a memory of him. However, he knows the odds are against him. He is writing a memoir and participating in a documentary with the aim of leaving a legacy for his daughter.

''That's probably the hard thing for me. That she won't really know me. But hopefully, she can know of me.''