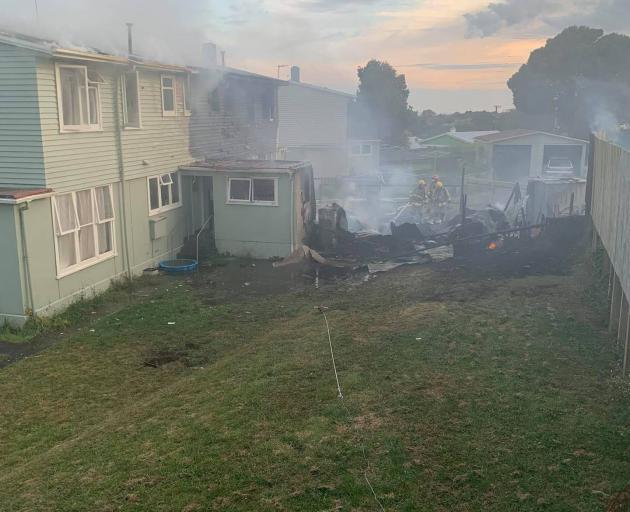 New Plymouth firefighters dampen down hotspots after a house fire this morning. Photo: Kayla Bridger
The occupants of a New Plymouth house managed to escape unscathed after their home went up in a fiery ball of flames.

On arrival, firefighters found the house in flames.

The fire had been put out by 8.30am, but crews were still dampening down hot spots.

Neighbour Kayla Bridger was woken by the noise at first, thinking it was somebody breaking into their property.

"I thought someone was breaking into our cabin outside as there was glass breaking and people yelling," she told the Herald.

"Then it was the smell and, walking down the hallway, I saw it out of our dining room window."

Bridger's mother, Lyn, captured the blaze on video, which included a massive explosion.

Kayla Bridger said they were worried for surrounding houses at one point and whether there was anyone trapped inside.

"We weren't too scared as we had another neighbour's house on our fence line burn down in November so it was more like 'oh no not again'.

She wanted to give credit to local firefighters, who hit the fire "with everything they had" as soon as they arrived and appeared to get it under control within 20 minutes.

"The house is really black now and nothing looks like it can be saved but that can be replaced, people cannot."