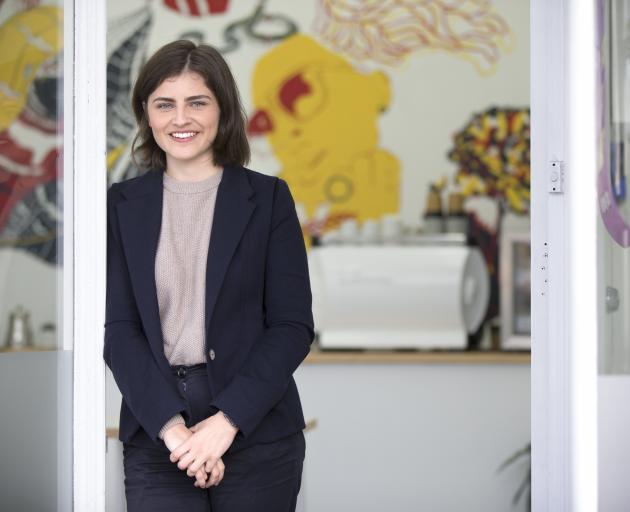 Chloe Swarbrick has learned a lot in her first two years in Parliament. Photo: NZ Herald
Three years ago, Chloe Swarbrick, then 22 and fired up after a dispiriting series of interviews with local body election candidates for Auckland radio station bFM's show The Wire, decided to stand for the Auckland Mayoralty.

She did not win, but performing well ahead of expectations by finishing third meant she was approached by several national political parties.

Now a Green Party list MP, Ms Swarbrick last week found herself closing a circle by coming to Dunedin to speak at the launch of the city's Green's local body election campaign.

In three weeks Ms Swarbrick and her parliamentary colleagues will be back in Dunedin for the party's annual general meeting, on August 3-4.

That is unlikely to be the last time Dunedin sees the Green team, because the party wants to increase its visibility across the South Island, having lost the profile once afforded it locally by Dunedin-based former co-leader Metiria Turei.

"Three of our MPs are in Auckland, some are in Wellington and Eugenie (Sage) is in Christchurch, but we want to make sure people can see us and grill us in the streets," Ms Swarbrick said.

"While being visible in the community is one thing, you run the risk of talking to the same groups unless you get out and talk to the people."

While she is an MP for an environmental party and sits on the environment select committee, Ms Swarbrick's suite of portfolios runs across social and economic issues, including mental health, education and drug law reform.

"[Former co-leader] Jeanette Fitzsimons said from the beginning, and I think it's been lost a bit because our name is Green and our colour is green, that we are fundamentally focused on dismantling an economic system that exploits both people and the planet," Ms Swarbrick said.

"Fundamentally the Greens are about economics, and that is what I am really interested in."

With mental health and drug reform having been high-profile issues this year, Ms Swarbrick has been afforded many more chances to make a mark than most first-term MPs get, something she was aware of and grateful for.

"I was very hesitant to take up drug law reform because it's not why I am in Parliament," she said.

"I was aware of the political risk, in that it can overshadow everything that you do because it has so much controversy ... but I decided, with position of influence and privilege that I have, that I couldn't not."

Her colleagues recognised her strong first year in politics by giving her the Green slot in the annual adjournment debate, one of Parliament's important set piece debates in which party leaders usually speak.

Playing a role in the Government response to the mental health inquiry has been a highlight of Ms Swarbrick's second year in Parliament.

Having spoken publicly about her own mental health challenges, her involvement was sincere and wholehearted.

"There is definitely more work to go and we are all conscious of that; I have been working with Dr David Clark for about 20 months on it, most of the time we agree but sometimes we don't and we have had some very hearty discussions," Ms Swarbrick said.

"But ultimately one of the most important things is that the Government lives up to its rhetoric and I see role as making sure that Labour ministers do that ... my role is to be very loud and annoying."

Despite being regarded as an MP on the rise, the "toxic environment" of Parliament had led Ms Swarbrick to question whether she wanted to return for a second term.

A very attractive job where she could lead transformative change might be tempting, but for now she wanted to be an MP doing it her way in a party which allowed her to, she said.