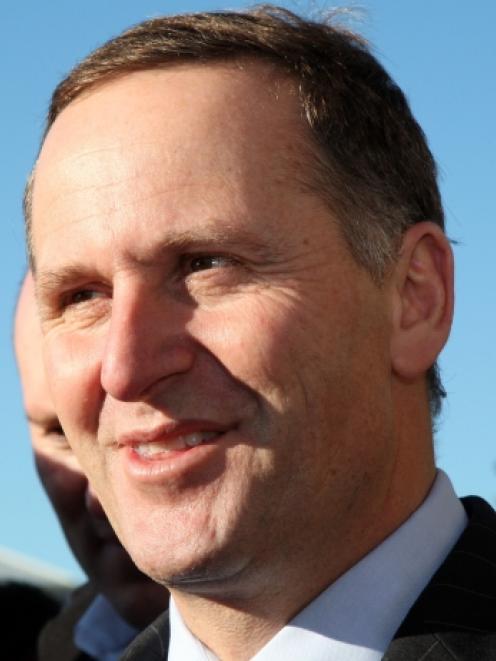 Economic Development Minister Gerry Brownlee and Arts and Culture Minister Chris Finlayson met husband and wife filmmakers Sir Peter Jackson and Fran Walsh at the Beehive this morning over the issue, which has actors and producers locked in an industrial dispute over employment terms and conditions for actors on their planned two-part adaptation of the JRR Tolkien book.

Mr Key this afternoon said the last thing the Government wanted to see was The Hobbit films being made elsewhere but that it had no plans to offer further financial incentives to keep them here.

"I don't think we would want to be responding to demands from a union by increasing the subsidy from the Government. I don't think that's the right response," he said.

"The parties need to try and resolve those issues themselves.

"(But) reading the tea leaves, it looks as if progress is being made.

"If it's not made, then we may well have a look and see what the next steps might be but we're hopeful we can make progress."

The film's co-writer and co-producer, Philippa Boyens, today warned it was far from certain that it would be shot in New Zealand.

The dispute had damaged New Zealand's film reputation and "thrown doubt on how stable our industry is in terms of industrial relations", she told Radio New Zealand.

"That is what is being put in jeopardy - not whether the production goes forward, but whether it's made here."

A number of countries were lobbying for the film to be moved offshore, including Scotland, Ireland, Canada, Australia and countries in Eastern Europe.

"It's not a game because right now, in America, Warner Brother's studios are running the numbers on five to six different locations. That's very real - and that has put at risk the livelihoods of countless thousands of New Zealand industry workers."

The actors' unions had been naive in their demands, and had jeopardised the production's future in New Zealand, Boyens said.

The New Zealand Actors' Equity union said yesterday it was "hopeful" its disagreement with producers could be resolved.

Council of Trade Unions president Helen Kelly declined to confirm reports the spat was near resolution.

Meanwhile, Boyens confirmed Hollywood media reports over the weekend that a deal over the rights to JRR Tolkien's book was close to being signed, and the film would soon get the go-ahead from studios.

"I think it's looking hopeful, but it's not signed yet," she said.

"The rights are tied up in an extremely messy, entangled way, and the studios involved in the making of the picture - MGM and Warner Brother's New Line - have been going through extensive talks to resolve that issue."

The reports cited anonymous sources which said a production could begin as early as January for a 2012 release.

It was also reported the film would be shot in 3D.