What started out as a joke has become a safe space for residents to talk about their feelings and meet their neighbours.

Cody Adlam (21), his flatmate Cassius Kulsen (19) and their neighbour Adrian Page (40) are known in the community as the ‘Sydenham Street Wavers’.

The three men set up a bar stand, made from wooden pallets, each weekend on Huxley St and invite their neighbours to stop by for a hot drink, a biscuit and talk about their feelings.

“We’re pretty shocked at how big it is,” Adlam said.

“It started out as a joke.”

The trio quickly gained popularity among residents and get a lot of waves from passersby.

Adlam said the idea started when the group was fundraising for breast cancer in January. 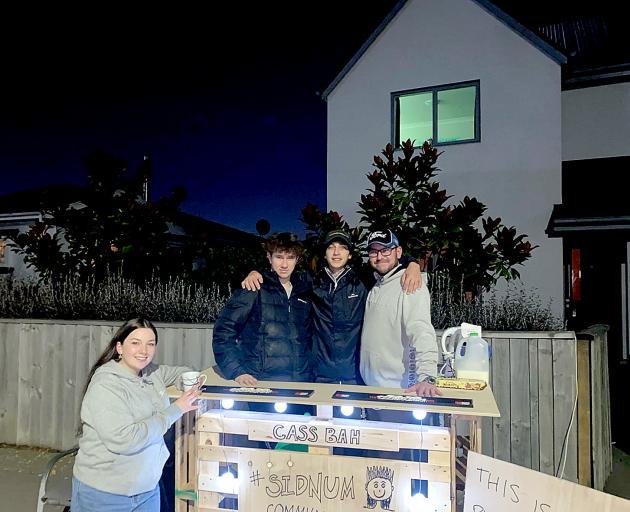 Resident Cinta Terry stops by for a chat with the Sydenham Street Wavers. Photo: Supplied
They set up a couch on the street with a sign that said every beep equals a dollar donation from one of the three men.

“Every now and then we would put a couch and rug on the street and decided to have a bar one weekend,” Adlam said.

The group set up a sign that reads: “This is a safe place for all people to talk about their feelings haere mai."

After seeing the positive reactions from people, the group decided to make it a regular thing.

“People driving past stop and ask us what we’re doing,” Adlam said.

“Some people say: ‘Oh I needed to hear this today’.”

Adlam said they often have people stop by for a chat and open up about things they’re struggling with.

“Growing up, talking to people was kind of hard to access, so it’s nice to be able to have a chat with people.”

The group even had someone who was drink driving pull over for a chat and let them drive her home, while another person opened up about struggles with domestic violence at home.

Adlam said even when the group aren’t out on the street they can hear people beeping their horns when they drive past.

“It’s nice that it brings people joy,” he said.

“It brings us joy as well.”