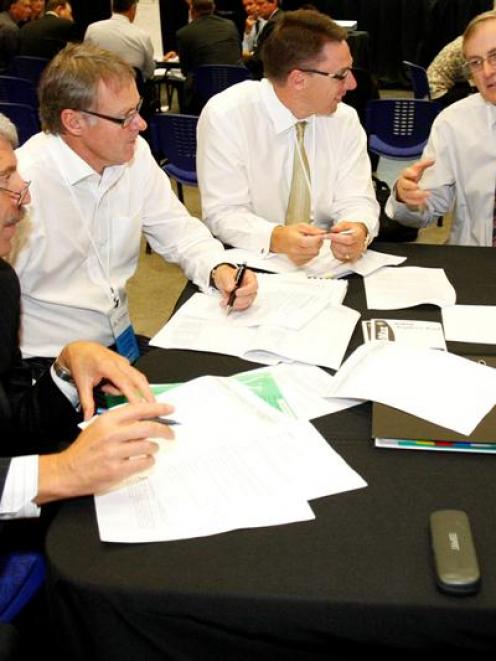 Reserve Bank Governor Dr Alan Bollard, right, speaks in at a workshop at the Job Summit. Photo by NZPA Images.
A national campaign to save or create thousands of jobs and stabilise shaky businesses will hinge on three main ideas from yesterday's Jobs Summit in Manukau.

A nine-day working fortnight, an investment fund worth hundreds of millions of dollars and - the surprise item - a cycleway the length of New Zealand are among the few specific ideas to emerge in a 21-point plan to counter the ailing economy.

Prime Minister John Key will give priority to working on taxpayer-paid training subsidies for businesses that cut a working fortnight to nine days, with nine days' pay.

The broad proposal is to "retain jobs by reducing wage costs while firms' earnings are down" with a "possible focus on a nine-day fortnight or maximum six-week block release".

Officials calculated that, if the scheme covered 10% of all employees working at least 20 hours a week in firms employing at least 20 people, it would help 70,000 people and cost $191 million a year, including $63 million to subsidise training or tuition.

Andrew Little, of the Engineering, Printing and Manufacturing Union, who helped to design the proposal, said the subsidy would be restricted to companies that would have to lay workers off otherwise.

Mr Key has ruled out the Government entirely paying the wages for the 10th day, saying: "I think it wouldn't be possible to fund it 100%."

The Government was more likely to pay for training than wage replacement.

The cost to the Government of paying a one-day-a-fortnight wage subsidy has been put at $320 million a year.

Mr Key, in his closing speech to the summit, said he wanted to investigate the idea "without delay".

The summit also heard about Mr Key's idea to complete the Te Araroa walkway the length of New Zealand, and his plan for a mountain-bikeway to match it.

Under the plan, $50 million would be spent to employ 4000 people to build the cycleway.

Summit chairman and Stock Exchange chief executive Mark Weldon said Mr Key raised the idea at a pre-summit meeting on Tuesday. It was not one of the formal top 20 ideas.

The most expensive proposal from the summit was for an equity investment fund involving the Government and private banks as partners. The scale envisaged would involve the banks and the Government each contributing something like $1 billion to the fund which, given their strong credit ratings, could then be boosted to perhaps $10 billion with debt.

One attraction for the Government, acknowledged by Mr Key, was that it would put it at arm's length from corporate bail-out decisions.

The most expensive single pledge given yesterday came from Warehouse founder Stephen Tindall, who said the Tindall Foundation would put $1 million towards "bottom-up" training that helped improve people's access to information and services.

About 200 leaders from business, unions, sector interest groups and politicians took part in the summit, which divided into six work groups.

At the summit, Mr Key said the public-private investment fund would be "a pot of investment money to help New Zealand companies get the access to share capital they need to grow their cake and therefore to create jobs".

Later, he said it was an idea with "a fair bit of merit", but would need to be explored.

Finance Minister Bill English said: "It is worth investigating. We just need to be clear what it does that banks wouldn't already do."

He singled out for mention a possible public-private fund to help increase tourism.

He also said he wanted to fast-track implementation of National's youth guarantee scheme which covers the transition from school to training or study.

Mr Key has assigned public servants in his own department, the Department of the Prime Minister and Cabinet, to oversee development of the ideas.

The main ones would receive a Government response, and he wanted to meet the leading summit participants in six to eight weeks.

Mr Key said everybody who attended the summit had taken a risk, "but you put the interests of your country ahead of yourself or your organisation".

Some ideas might appear in the May 28 budget, but Mr English has given himself only $1.75 billion of new spending and some of that is already committed.