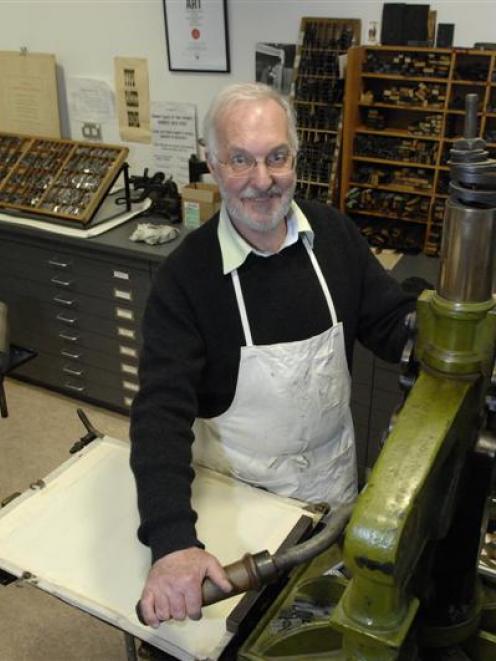 Alan Loney uses an Albion handpress during his time as printer in residence at the University of Otago in 2008. Photo by Linda Robertson.
New Zealand poet, printer and editor Alan Loney has won the 2011 Janet Frame Literary Trust Award.

Loney (71) has lived in Melbourne since 1998, but has been widely published in New Zealand, Australia and the United States.

He said he was "astonished, delighted, honoured and somewhat moved" to receive the $10,000 prize.

"How confirming it seems for such a life's work that I have had."

Born in Lower Hutt, as the eldest of eight children in a working class family, Loney left school at 15.

His first volume of poems, The Bare Remembrance, was published by Caveman Press in Dunedin in 1971.

He moved from Dunedin to Christchurch in 1974 to set up a private press, Hawk Press, which championed the work of young New Zealand poets.

By the time Hawk Press closed in 1983 it had published more than 20 poets.

He was appointed printer in residence at the University of Otago in 2008.

Loney has a novella, Anne of the Iron Door, and three poetry volumes with Rubicon Press (Canada), Ninja Press (California) and Chax Press (Arizona) scheduled to be published this year.

"They're offered in her spirit of wanting to give encouragement and financial support to established writers of proven merit, who may be overdue for some recognition or reward," Ms Gordon said.