Escalating tensions and a stronger police presence prompted uneasy scenes at the occupation - with protest leader Pania Newton saying she was rammed by police with a gate last night, causing her to fall over.

"A number of male police officers were quite physical with some of our female land protectors, and we're very confused as to why that happened last night at our time of prayer."

Newton said they had been getting ready for late-night prayers last night when police turned up.

"It's just been shocking in the way that we've been treated down here.

"Without any notice, police cars have pulled up... and we've been told that if we don't move off the frontline, we could face being trespassed or even worse, arrested," she said.

"But we are still peaceful and positive down here, whānau.

"We don't plan on being arrested. That's not our kaupapa. Our kaupapa is about being peaceful and to protect our whenua."

Prime Minister Jacinda Ardern has confirmed she has no "immediate" plan to visit the protest site.

"I have no immediate plan to. I haven't ruled it out in the future but not right now."

An update on the Save Our Unique Landscape (Soul) campaign website early this morning reiterated claims that women at Ihumātao last night were manhandled by male police officers.

"During their operation, a number of male officers were also physical with some of our female kaitiaki [guardians].

"No one was seriously hurt. However, the actions were completely unnecessary.

"We have continued and maintained a peaceful, passive and positive resistance as land protectors and we are proud of everyone who came out tonight and the way they stayed true to our kaupapa of rangimārie [peace]."

Protesters have gathered outside Fletcher Building, the developer of the Ihumātao site, this morning.

The self-proclaimed protectors of the land are holding a picket outside Fletcher Building in Penrose, Auckland from 7.30am today.

By 7am there was a strong security presence at the Penrose site. A small group of protesters are outside Fletcher's holding "Toot to support Ihumatao" placards. 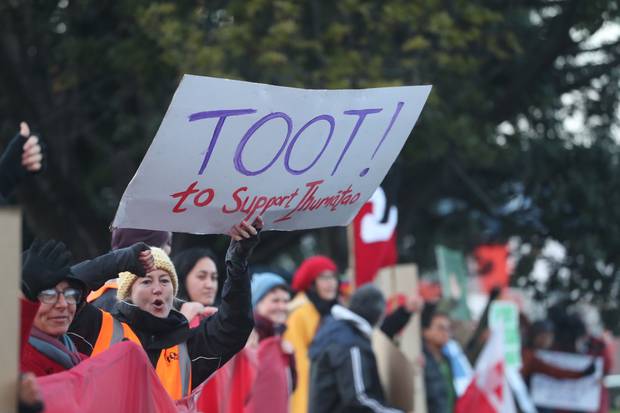 Protesters outside the Fletcher Building in Penrose. Photo: NZ Herald

More than 80 protesters are at the site, with some spilling on to the other side of the road.

Soul member Brendan Corbett used a megaphone to address protesters, but directed some of his message directly at Fletcher's executive Steve Evans.

He hoped Evans could hear him. He expected he was sitting around the boardroom table having a debrief with other board members - it would likely be an uncomfortable meeting, he said.

Corbett said last night there was a "crazy situation of 30 police cars driving at breakneck speed through Māngere Bridge" to interrupt people eating dinner and at prayer. It was a ridiculous situation as there was no emergency, he said.

Today's protests are being dubbed as "a national day of action".

As well as the protest event in Penrose, Auckland, other events today are planned for Hamilton, Wellington and Dunedin.

Supporters are being encouraged to dress in green to "support the protection of our whenua".

"Obviously the focus for us is to try and help facilitate a solution to be found, so that's what's underway right now and I absolutely stand by that being a role for us as the government.

"And at that time the announcement was made that there would be no more activity on the land until a solution was found. And that's the place that we're at right now."

An approximate 800-strong support crew from the Kīngitangamovement went with Māori King Tuhetia to Ihumātao at the weekend and were currently "directly involved in the discussions" that were happening right now.

"We're not directly involved in that at the moment it's very much a discussion between Māoridom seeking to find an issue for Māori."

Today's planned protest follows a standoff at Ihumātao that ended dramatically just before midnight as both sides abandoned their positions.

Hundreds of people turned up to the historical site in Māngere, South Auckland, after a call was made via social media when police suddenly boosted their numbers late last night.

Tensions were high at the protest site late last night as police sent in extra reinforcements to "maintain order", which split the protesters into two groups. There were accusations the police were kettling the protesters. Superintendent Jill Rogers said police had decided "to deploy additional police officers to ensure there is no breach of the peace".

The advance guard of protesters walked back to join the main group, and police then withdrew their line separating the two groups.

Protest organisers said they had reached an agreement with the police for patrol cars blocking the road to be removed while the protesters gathered in the road for prayers. 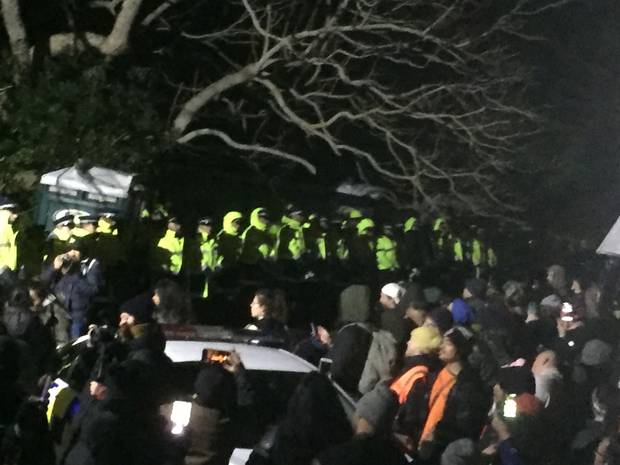 At 12.25am this morning about 80 police officers were still lining one side of Ihumātao Quarry Rd facing the combined group of several hundred protesters.

Protest leader Pania Newton said the protesters were waiting for a commitment from police to reduce their presence.

Singer Stan Walker told the protesters that they were standing up for indigenous peoples around the world. 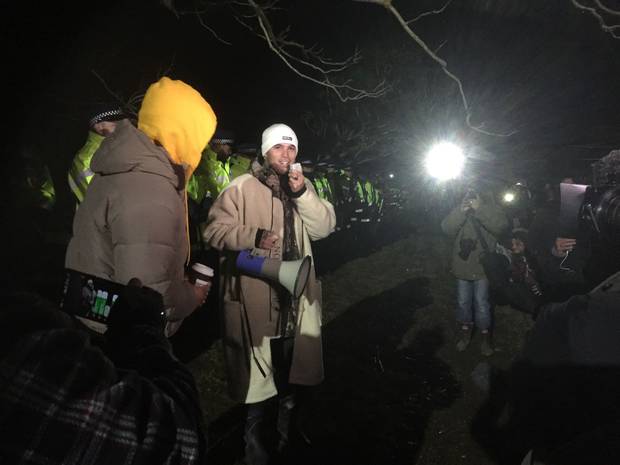 Stan Walker spoke to the crowd in front of police. Photo: NZ Herald

Newton earlier told the main protest group that the protesters were trying to resolve the standoff.

"We are working out how we can de-escalate the situation so we can all go home safely and our line can remain," she told the group.

A large group of police officers returned to vans as both protest groups chanted defiantly that they would never give up their land.

The mood was excited, with music blaring out of the main tent.

One young woman said she believed police wanted to spark the protesters into violence so they could arrest the leaders. But no one from the protest group challenged the police line.

Newton told Newshub that morning that she was hit by police with a gate last night, causing her to fall over. 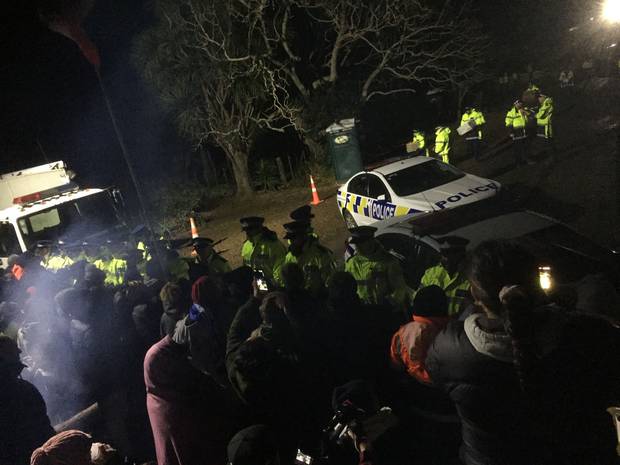 An update on the Soul campaign website early this morning reiterated claims that women at Ihumātao last night were manhandled by male police officers.

"During their operation, a number of male officers were also physical with some of our female kaitiaki.

"No one was seriously hurt. However, the actions were completely unnecessary.

"We have continued and maintained a peaceful, passive and positive resistance as land protectors and we are proud of everyone who came out tonight and the way they stayed true to our kaupapa of rangimārie [peace].''

This doesn't bode well for peaceful resolution. To Ihumātao kaitiaki - I have raised my concerns with government Ministers and am seeking more information behind this escalation. Please stay as safe and look after each other as much as you can, while I try find out more. https://t.co/zNJZnLalHc— Marama Davidson MP (@MaramaDavidson) 5 August 2019