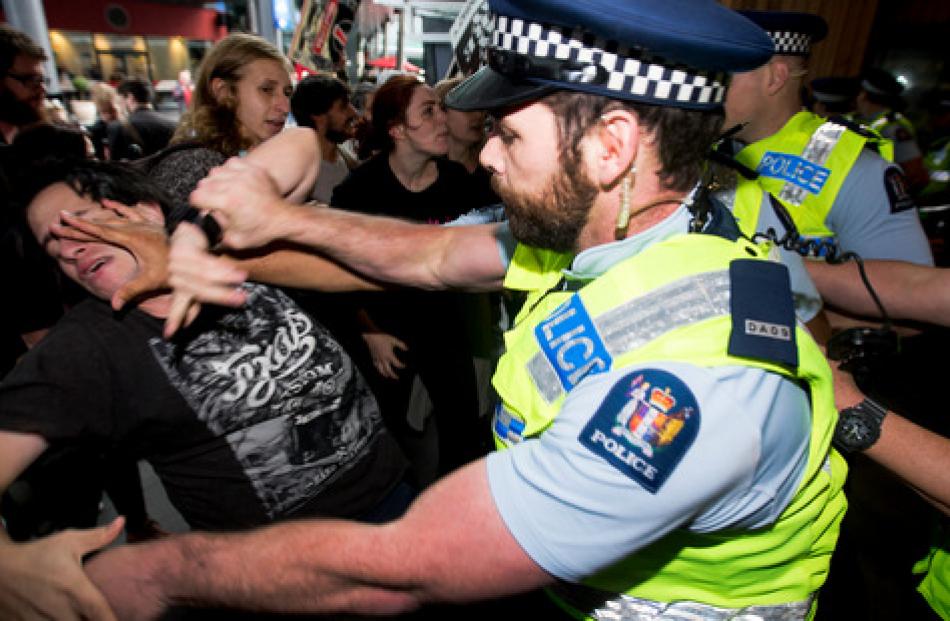 Police and security clash with protesters outside SkyCity during the post-Budget address. Photo by Dean Purcell, NZ Herald

The actions of protesters who tried to force their way into the SkyCity events centre today were disappointing, police say.

The disruption happened ahead of Prime Minister John Key's post-budget speech to the Trans-Tasman Business Circle.

The protesters, led by veteran activist Sue Bradford, made charges at the entrances but were pushed back by police.

They also surrounded broadcaster Paul Henry as he left the building.

Inspector Peter Gibson. said police faced sustained and sometimes aggressive attempts to enter the building through various entrances, which led to a number of assaults on police and Sky City security staff.

One person was arrested and police were continuing to review video footage of the protest.

A number of police staff suffered minor injuries, including scratches to the face and arms.

A member of the public was also assaulted as they tried to enter the building.

"This was a very challenging event to police and I am disappointed with the behaviour of these protesters," Mr Gibson said.

"Auckland City police is well versed in policing such events, however the behaviour of this crowd went well beyond what is acceptable.

"We we work hard to ensure the lawful right of protest is upheld, however what we faced today was an aggressive crowd which had little regard for lawful behaviour, our staff and the public who were also there."

Mr Gibson said he was aware of certain video and commentary on social media today about the actions of police. "Video which shows the full context of what police were facing paints a somewhat different picture from the selective extracts which some are choosing to show," he said.

Police would continue to review video footage of the protest with a view to deciding what further inquiries may be required.