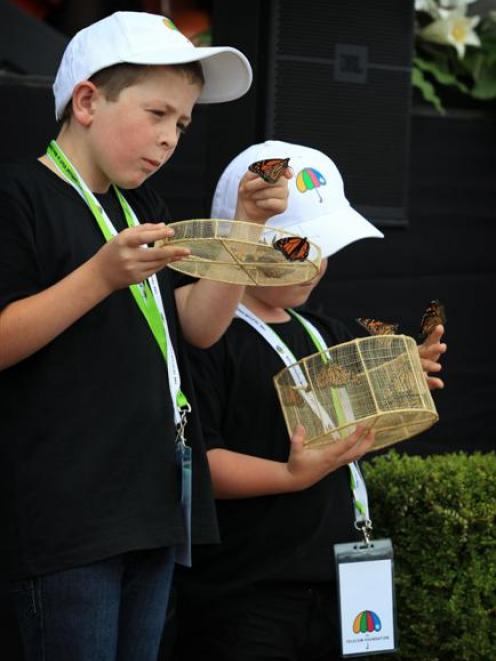 And because he reckons his dad is now with the angels, releasing butterflies at the end of yesterday's quake memorial was a fitting tribute by the 8-year-old. 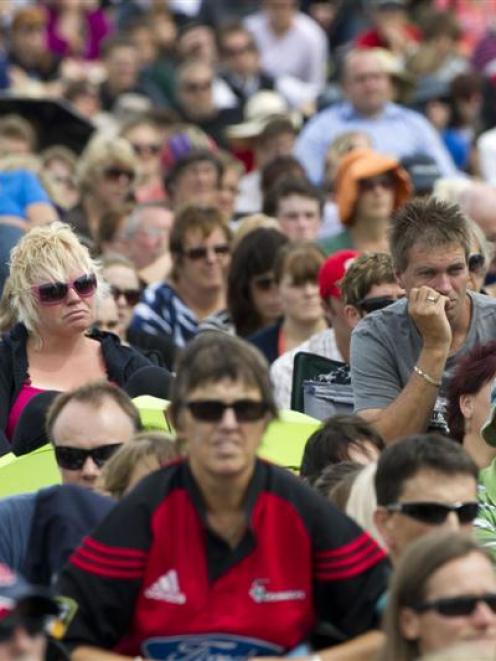 People mark the first anniversary of the devastating February 22 earthquake in a service at Hagley Park, Christchurch, yesterday. Photo by Reuters.
The boys, wearing T-shirts they had asked for specially with the CTV logo on the back, stood together in front of thousands of people yesterday and opened the lids of small gold boxes, freeing vivid orange and black monarch butterflies into the sky above Hagley Park.

After the ceremony Cameron voiced his thoughts regarding the gesture.

"I was thinking about all the funny things my stepdad did," he said.

"The butterflies remind me of angels ... angels with wings."

Tyler was overwhelmed by the emotions of the day, but thought his dad would have been happy with him.

"Today was the last day of the firsts. Bish was my best friend and I feel lost without him. I miss him often," she said.

"Today with the kids the butterflies were a reminder there is new life and hope. Bish will never be forgotten, but we can continue to honour his memory and live life as he would have."

One hundred and eighty-five monarch butterflies were released by eight quake-affected children.

"Today marks the start of a new day and new beginning for us all," he said.

He likened the rebuilding of Christchurch to the life cycle of a butterfly, growing from a cocoon to a vibrant creature.

Mr Bishop's parents, Karen and Lindsay, were also at the service, with his younger brother Ben.

Ben Bishop, a firefighter, spoke for the first time about his own quake experience. He was in his car in central Christchurch when the quake hit.

He abandoned the car and ran into the central business district to see if anyone needed help. He came across a building that had been destroyed and spent about four hours there helping rescuers.

"I had no idea at the time, but it was the CTV building. I didn't even recognise the building, that's how destroyed it was. I had no idea my brother was trapped in there.

"The next day, I talked to my dad and he said Andrew was trapped at work. I asked him where the CTV site was and he told me the address. That's where I'd been standing ... . and that's when it started to hit home a little bit."

Ben said the memorial service was emotional but he was proud his brother's name had been read to the crowd by a firefighter.

Lindsay Bishop said the anniversary had been "tough". But Mr Bishop would have been proud of his sons.

"He would have been absolutely stoked about the way the kids did the butterflies," she said.

The butterflies were supplied by the Monarch Butterfly Trust.