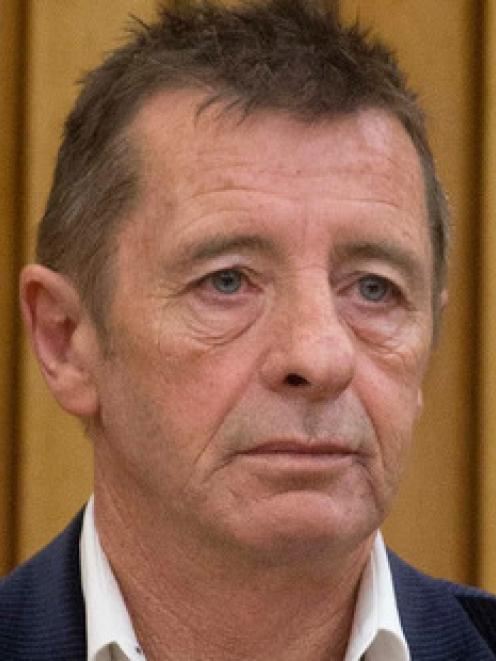 Phil Rudd.
Former AC/DC rocker Phil Rudd has been remanded on bail after being caught allegedly consuming and possessing alcohol while on home detention.

The 61-year-old drummer appeared in Tauranga District Court this morning over a breach in conditions of an eight-month home detention sentence handed down to him this month.

Appearing before Judge Louis Bidois, Rudd was also ordered to undergo drug and alcohol testing by police as an additional condition of his bail.

Rudd was seen to scowl and mutter swear words at the Crown prosecutor when she confirmed the new order.

His lawyer, Craig Tuck, did not oppose the new condition.

Remanding Rudd to reappear on August 3, Judge Bidois told him that any further offending could mean his home detention sentence being changed.

When he first appeared in the dock, he was seen to put his hand up, which led Judge Bidois to tell it would just "make you look foolish" and lead him to "just get on TV for nothing".

Rudd was arrested at his Tauranga home on Saturday night and spent yesterday in custody. It is understood prostitutes were present at his home at the time of his arrest.

Earlier this month, Rudd was convicted and sentenced having earlier pleaded guilty to charges of threatening to kill an employee, and for methamphetamine and cannabis found in his home during a police raid last year.

His sentencing conditions had confined him to 24-hour monitoring at his home in Harbour Drive, Tauranga, and prohibited him from taking any drugs not prescribed to him.

Mr Tuck has appealed against Rudd's sentence and conviction.

Bay of Plenty police have refused to comment on the latest arrest, with a spokesperson telling the New Zealand Herald she could not discuss individual cases.

Clad in a leather jacket bearing the name of his former band, AC/DC, Rudd had just one thing to pass on to waiting media as he left Tauranga District Court this morning - a raised middle finger.

After refusing to comment on his allegedly breaching of home detention conditions, by possessing and consuming alcohol, an under-pressure Rudd appeared to lose his temper at an assistant amid the media throng, demanding he give him the keys to his waiting Jaguar F-Type.

The drummer then hugged a well-wisher and stepped into the sports car, from which he briefly waved to journalists as he drove back past the courthouse again.

The last time Rudd was in court, Judge Thomas Ingram warned that he would go to prison if he breached the terms of his sentence.

"I stone cold guarantee that's where you'll end up - I'm not your headmaster, I'm not your father, I'm a judge," Judge Ingram told him at the time.

The judge also remarked that home detention had been his sole alternative to sending Rudd to jail.

At the sentencing, the court was told there was no direct evidence to suggest  that Rudd was actually still a member of AC/DC, which is scheduled to perform in New Zealand in December with Chris Slade as drummer.

Judge Ingram also challenged the idea that Rudd was an integral part of the band, remarking: "Queen replaced Freddie Mercury."

2007: Pleaded guilty to common assault after an incident with his former wife aboard his luxury launch Barchetta at Tauranga Marina.

2011: Pleaded guilty to possession of 25g of cannabis found on Barchetta.

2014: Acquitted of deliberately lying about his prior drug use to obtain a medical certificate to enable him to renew his private pilot licence. The Court of Appeal last month rejected an appeal by the Civil Aviation Authority.

November 2014: Charged with attempting to procure the murder of two people following a police raid. The charges were soon withdrawn by police, who also charged him with threatening to kill an employee, and for methamphetamine and cannabis found in his home during a police raid last year.

April 21, 2015: Unexpectedly changed plea of not guilty to guilty. It emerged he told an associate he wanted a former employee "taken out'' and offered him $200,000, a motorbike, and the choice of one of his cars or a house.

July 9: Convicted and sentenced to eight months' home detention and warned by Judge Thomas Ingram he would be sent to jail if he re-offended. His lawyer Craig Tuck lodged an appeal soon after.

July 18: Arrested at his Tauranga home for breaching conditions of his home detention sentence by possessing and consuming alcohol.

July 20: Remanded on bail to re-appear on the new charge on August 3.