Shack the shark dives to a record 1200m 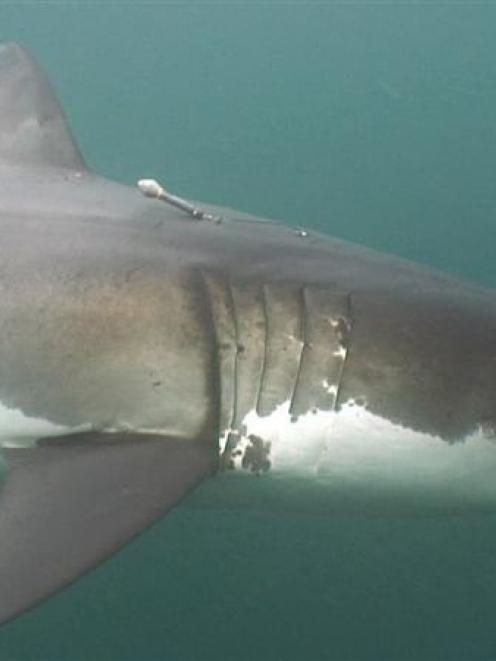 A 4.8m-long shark called Shack made the dive and several others of between 1000m and 1200m while crossing the ocean, National Institute of Water and Atmospheric Research (Niwa) principal scientist Malcolm Francis said.

Previously, the team had only recorded several dives at about 1000m, so "it's quite a substantial extension".

The discovery was made as part of a joint Niwa and Department of Conservation (Doc) investigation into the long distance movements of great white sharks inside and outside New Zealand's territorial waters.

The work aimed to improve understanding of their migratory patterns and assist with designing management measures to reduce shark bycatch in fisheries.

Scientists had tagged Shack and 24 other great white sharks with electronic pop-up tags which recorded location, depth and temperature, at Stewart and Chatham Islands, over five years.

They had just completed another two-week trip to Stewart Island to tag the sharks, which have been protected in New Zealand waters since 2007.

The expedition was "extremely successful" with about 30 different sharks being recorded using photo-identification techniques, six sharks being tagged with pop-up tags, and one with a dorsal fin tag, he said.

"Before we started this work, five years ago, it was thought that great white sharks were cold-water animals.

But it seems the great white sharks are taking tropical winter holidays, departing New Zealand between April and September, for somewhere warmer."

The maximum distance migrated was 3300km.

One shark returned to its Chatham Islands tagging site after spending six months at Norfolk Island, he said.

"Our sharks don't cross the equator; so far, our tagged animals have only gone as far north as 17 degrees south, north of New Caledonia," Dr Francis said.

They could travel 150km a day and it took them just three weeks to get to Australia.

The focus of the team's research was now moving from the large-scale picture of movements around the southwest Pacific to the smaller-scale habitat use in our own back yard, Dr Francis said.

The team would be deploying more dorsal-fin tags and also acoustic tags which send out sound pulses picked up by listening stations up to 500m away.

"These tags will hopefully reveal whether sharks repeatedly return to the same locations, how long they spend in one spot, and what their favourite spots are."

The research was funded mainly by Doc, the Foundation for Research, Science and Technology, and Niwa.