Three peace activists walked free today even though they admitted breaking into a Government spy base near Blenheim and slashing an inflatable plastic dome covering a satellite dish. 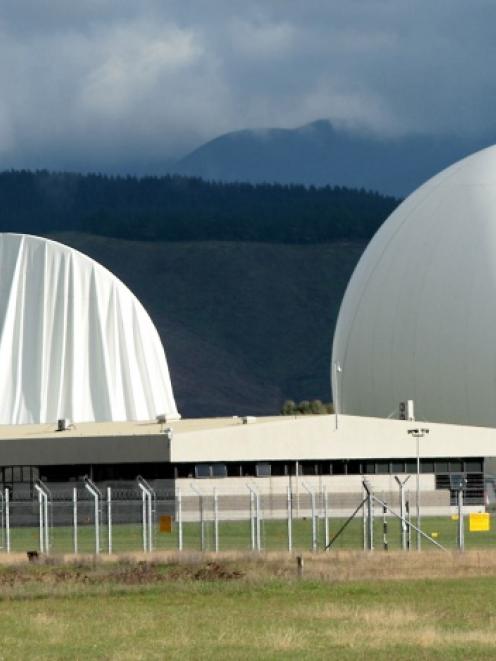 The damaged inflatable cover on the satelite dish at Waihopai Spy Base, after activists deflated the dome in April 2008. Photo by NZPA.
A jury in Wellington District Court took only two hours to find schoolteacher and part-time farmer Adrian Leason, Dominican friar Peter Murnane, and farmer Sam Land not guilty of all charges against them.

The men were each charged with two charges of wilful damage and one of burglary, after they were arrested at the Waihopai facility, operated by the Government Communications Security Bureau (GCSB) in April 2008.

The trio readily admitted attacking the base, but said they were driven by a belief that the satellite caused human suffering and their actions to shut it down, if only temporarily, were lawful.

The group had accomplished its mission, a delighted Adrian Leason said outside the court.

"Our little...action is, in a sense complete. We've prepared, we've done an action, we've had the trial, we've given each other a hug and now it's over," he told NZPA.

The father of seven said he would now gather his family and supporters and head back to Otaki to celebrate.

And the appropriate manner to celebrate the day of their vindication? "Food and beverages and singing and a mighty fine party," Mr Leason said.

Peter Murnane, who represented himself throughout the trial, said the action taken by the group had been successful.

"We wanted, in going into Waihopai, to challenge these warfaring behaviours and I think we have done this," he said. "We have shown New Zealanders there is a US spy base in our midst."

Australian non-violence activist Bryan Law, who had come across the Tasman to support and blog about the trial, said the jury's decision accorded with those made by other jurors in similar cases in other countries.

"Of all of the millions of people that marched in 2003 (to protest the Iraq War), had only 1 percent of them taken this sort of action, the war would not have been possible.

"We don't need to be saved by the politicians - we can save ourselves."

In his closing arguments today, Leason's lawyer Michael Knowles said the men were driven by a belief that the satellite caused human suffering and their actions to shut it down, if only temporarily, were lawful.

"That belief doesn't have to be correct," he said. "They had a belief in a higher law, a law for protecting people."

Murnane said he believed the satellite aided crimes against humanity.

Land's lawyer, Tony Shaw, said his client genuinely believed his actions were lawful, and he should be acquitted.

Crown prosecutor Glen Marshall said the men deliberately and intentionally damaged the satellite cover hoping, rather than believing, their actions were lawful.

"It's not a belief, it's something less - a hope, an expectation, an opportunity."