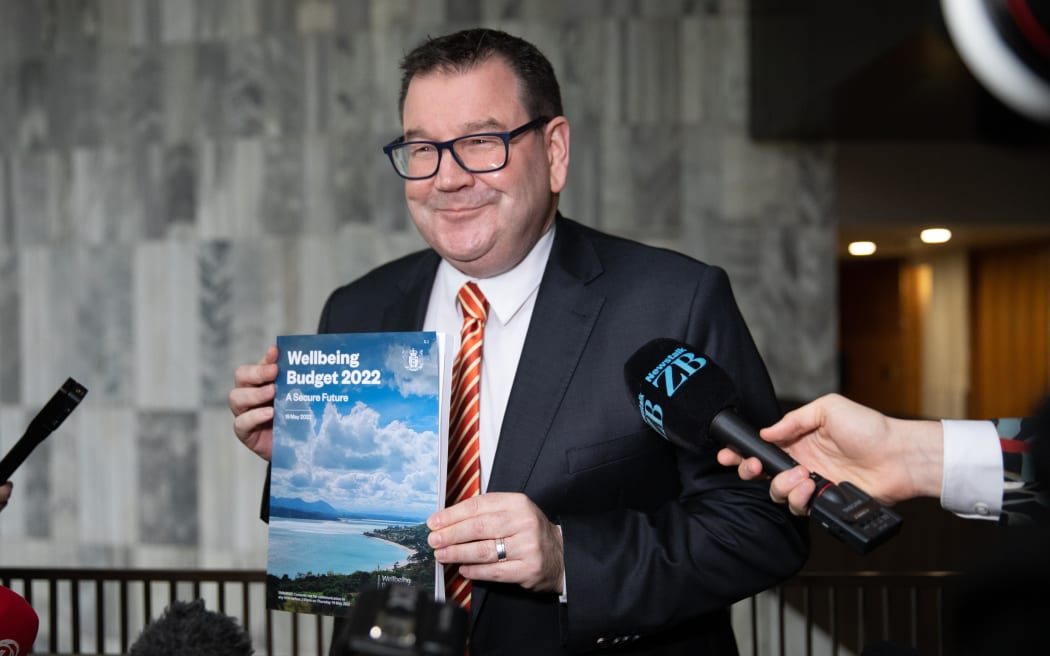 Finance Minister Grant Robertson with the Wellbeing Budget 2022 Photo: RNZ
Grant Robertson likes to brush off questions about the forthcoming Budget by channelling Father Christmas, saying MPs and journalists just need to count down the "sleeps" until Budget Day.

Well, today's the day, when New Zealanders get to unwrap $6 billion worth of Budget goodies - just what they are will be revealed when the Budget is published at 2pm.

But first - cheese rolls. Robertson, originally from Dunedin, has a Budget day tradition of sharing cheese rolls with the Prime Minister Jacinda Ardern. On Tuesday, he said he planned to share cheese rolls with Ardern remotely, given Ardern is currently isolating with Covid-19.

Covid also came for Robertson's other Budget day tradition: wearing a new Budget day tie, gifted by Ardern. He said this was being delivered this year, rather than presented to him personally.

Health is expected to be the big winner, with about half of all new spending tipped to be going to the sector - about $3 billion.

Some will be required to wipe DHB deficits as the DHBs are abolished and health services are rolled into the new health agency, Health NZ.

This will be a big dollop of money too. Robertson told a business breakfast earlier this month the Government would put an end to regular deficits in the Health system.

"The current health system is incredibly inefficient. Over the past two decades, DHBs have learned to run annual deficit after annual deficit because they know the annual Budget process allows them to do this," Robertson said.

He said this would come in a two-year funding allocation initially.

"Budget 22 introduces – initially – a two-year funding allocation as we get our new streamlined health system up and running," Robertson said.

The Government is expected to fund two dental policies promised at the 2020 election, but missing from the last Budget.

Labour promised $176 million (over four years) to increase the amount people could claim for an emergency special needs grant for dental care, from $300 to $1000, as well as funding for mobile dental clinics, costing $37.5m.

Health Minister Andrew Little has said the Government remained committed to the policies.

"I'm aware of the need for improved dental healthcare assistance and mobile services, that's why Labour made its manifesto commitment," Little said.

"This Government remains committed to our dental manifesto policies and when I am ready to make an announcement I will do so," he said.

Question marks remain over big portfolios like Education and Social Welfare, and whether either will get new cash injections. Benefits were given a major increase in last year's Budget, making a further major increase unlikely, however Labour has made some social welfare change in every Budget it has delivered.

Other large portfolios like Foreign affairs and Defence, both increasingly important given rising geopolitical uncertainty, have also been quiet in the round of pre-Budget announcements. There have been calls to lift defence spending to 2 percent of GDP from the Act Party. Even National has said it would like to at least contemplate lifting the Defence spend.

Another question Robertson may decide to answer is whether the Government will extend its fuel excise tax cut and half-price public transport fares beyond three months.

On Monday, Robertson appeared to cite Budget confidentiality, saying he could not answer whether officials were telling him to extend that policy.

"We're continuing to assess the impact of that policy," he said.

The Government will also publish Budget forecasts, revealing Treasury's verdict on how much the economy will grow, how much wages will rise, what the level of inflation will be, and what's likely to happen to house prices.

Again, Robertson has managed expectations about these forecasts, saying ahead of time that the deteriorating global economy means the first surplus since Covid hit will come in 2025, rather than 2024 as had been previously forecast.

The Budget legally approves all Government spending, but the focus tends to be on the small tranche of new spending - $6b this year. Existing spending, totalling about $114b, is not really discussed.

Former finance minister Steven Joyce said there was lots of worthy stuff to spend money on ahead of the budget announcement today.

He told ZB's Mike Hosking that last year's growth projections were hopelessly optimistic and he hoped for more realism from the treasury this year.

He said we could be heading towards 9 percent inflation and said the finance minister needed to carry responsibility for this if it were to occur.

"This is a massive budget allowance that he has been very coy on... so I suspect what we will is it more targeted at the lower incomes, so I don't expect to see middle income New Zealanders picking up much," said Joyce.

Dr John Bonning, a top emergency doctor, said funding needs for the healthcare seemed to be a bottomless pit but there was always plenty more that needed the money.

"We want to make sure there is still an emphasis on acute care, patients who come to emergency departments. We need more beds, nurses, access to diagnoses, and theatre so we can admit our acute patients," he said.

He told Newstalk ZB's Mike Hosking that the health system was providing better care for the country but things were getting more expensive.

He said it was great that money was going to mental health, elective services, and primary care but that there was "plenty that still needs the funding."

Health is expected to be the big winner in today's Budget. Photo: Getty Images
He added that the funding can't all be spent on structures and systems as opposed to front-line healthcare, referencing the roll-out of DHB's.

What we know already

Finance Minister Grant Robertson has stated the Government has $6 billion to spend on top of normal expenditure this Budget, with the lion's share going to the health sector.

Here is what has already been announced in the preceding weeks:

The first pre-Budget announcement on May 1 allocated $88 million to addressing attendance and truancy issues. Much of it is to cover a four-year period.

It includes a regional response fund of $40m over four years was being established to meet local education needs.

The package also included $11.2m for a positive behaviour and learning programme and $7.75m specifically for Māori and Pasifika communities, where there are large discrepancies.

On May 3, Robertson announced a new debt ceiling of 30 percent of GDP. This came with a warning the current Budget would show a worsening fiscal position compared to forecasts put together by Treasury in December last year.

Treasury was also to now measure New Zealand's net debt by taking into account a wider range of Crown assets like the NZ Super Fund, and liabilities like the debt held by Kainga Ora.

Using IMF comparators, New Zealand's net debt as a percentage of GDP of 20 per cent would compare with rates of 37.5 per cent in Australia, and 76.1 per cent in the UK.

Funding for 64,000 more people to get driver licences

The investment of $86.5 million across four years is to help 64,000 New Zealanders benefit from improved access to driver licensing, testing and training.

It was announced on May 4 by Development and Employment Minister Carmel Sepuloni and Minister of Transport Michael Wood.

On May 5, Biosecurity Minister Damien O'Connor announced $42.9m to bolster biosecurity for future incursions and $68m over the coming year to continue the M. bovis livestock disease eradication programme.

Just one property remains with the disease, down from 54 in 2019.

Boost to police to 'target gangs'

The funding would go towards more frontline police, a new firearms unit and a package to help businesses protect themselves from ram raids.

A $230 million investment would support another 24,000 apprentices getting Apprenticeship Boost support and 14,000 to keep being supported beyond August this year.

Education Minister Chris Hipkins and Social Development and Employment Minister Carmel Sepuloni made the pre-Budget announcement on May 9.

Eliminating violence at home and in communities

Marama Davidson, Minister for Prevention of Family Violence and Sexual Violence, announced the funding on May 10, and said the investment would include $38.1 million more for community-led integrated responses.

Minister for the Digital Economy and Communications David Clark announced on May 15 $20m over four years towards two key initiatives in the Digital Technologies Industry Transformation.

Clark said the Budget funding will support the growth of the Software-as-a-Service Community (SaaS).

He said it will also help to take the marketing initiative, called New Zealand's Tech and Innovation Story, to key markets such as the United States, Australia and Europe.

On Monday the Government announced $4.5b would go towards a range of schemes, strategies and plans associated with the Emissions Reduction Plan.

The funding would come from revenue from the Emissions Trading Scheme, which puts a price on greenhouse gas emissions.

The fund will initially have $2.9b over four years.

The transport sector will get a $1.2 billion boost, including $569m for the Clean Car Upgrade, which will help lower and middle-income households scrap high-emitting vehicles in exchange for electric and hybrid alternatives.

Agriculture would get $710m over four years including $339m to accelerate technology, and to establish a Centre for Climate Action on Agricultural Emissions.

Just over $650m had been allocated to decarbonising industry over four years until 2026, with another $330m over three years after that.

One would expand Mana Ake, with $90m set aside to start services of the school-based programme in Northland, Counties Manukau, Bay of Plenty, Lakes and West Coast regions, as well as continue existing services in Canterbury and Kaikōura.

Little also announced a $100m investment over four years for a specialist mental health and addiction package, including about $27m to make more acute services available.