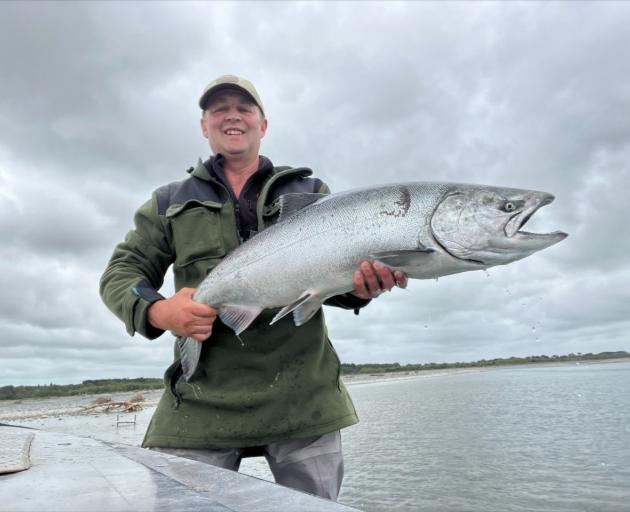 Simon McMillan caught an 8.95kg fish on the Rakaia River, his biggest salmon since 2013. Photo: Supplied
Rakaia River salmon anglers are revelling in what they say is the best season for a decade.

"It’s one out of the box so far," said Simon McMillan of Leeston.

He is leading the Southbridge Hotel salmon fishing competition after he weighed in a 8.95kg fish on January 6.

Hotel owner/operator Harry Singh said it was the biggest fish entered in the competition since 1997.

The smallest so far this season was 5.65kg, which would have been considered a good-sized fish in previous seasons.

"We have a lot of big fish, which is really impressive," Singh said.

About 30 people were registered for the competition, which will run until April 30.

Just one entry per person is permitted, and only about five people have so far weighed in their catches, with the peak of the season not until next month.

McMillan agreed it was fantastic to see plenty of big salmon around.

"The last eight to 10 years of salmon fishing has been very, very tough in the Rakaia River, but to see the number of fish we have seen and the size of them has been good,” McMillan said.

He was "absolutely rapt" to catch the biggest fish he had landed since 2013, which he hooked on a cold, overcast and windy afternoon.

He was holidaying at the north Rakaia huts with wife Vicki and his two daughters when he decided to pop out and take the family's pet labrador, Ferg, fishing with him.

After jet-boating upstream he cast his rod from the riverbank.

"The fight and the thrill of getting the biggest fish I have caught in a number of years was well worth the cold hands," McMillan said.

He was not confident of winning the Southbridge Hotel competition.

"I’m not thinking it’s a done deal, because there’s plenty of the season to go."

Meanwhile, Fish and Game NZ said it is too early to confirm anecdotal reports from anglers that it has been the best start to the season in 10 years.

"There’s certainly a lot of activity down there at the moment," Cosgrove said, referring to anglers converging on the river’s two mouths and lagoon area.

Set against a backdrop of a declining fishery, there is a new bag limit on sea-run salmon season in force this season.

Anglers are restricted to just two for the whole season, compared to one salmon each day last season.