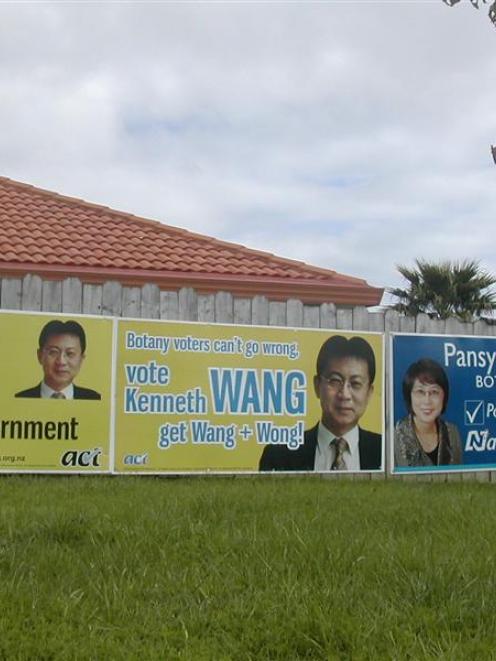 Taking the Pulse had heard about the provocative election signs being used by Act New Zealand candidate Kenneth Wang, who is standing in the new Botany electorate, and wanted to see whether the stories about the battle between Chinese candidates for Chinese voters was as intense as reported.

The new seat in east Auckland is one-third Asian and has more voters born overseas than in New Zealand.

The Botany electorate was formed last year by incorporating parts of Clevedon, Manukau East and Papakura.

People born overseas (49%) outnumber the locals (47.9%) and the electorate has the country's second-highest proportion of Asian voters (33.5%).

But the strong competition for Chinese votes in particular has created a backlash among other voters.

They are National's Pansy Wong, Mr Wang and Simon Kan from the Kiwi Party.

The New Zealand Herald reported that some Botany residents shunned a meeting to meet the candidates because they did not like campaigns in the electorate being run "like a Chinese market", nor that the facilitator for the meeting, Lloyd Wong, was Chinese.

Five of 10 non-Chinese residents who spoke to the Herald also complained about receiving political pamphlets in a language they did not understand, the media turning Botany into a Chinatown by focusing on the Chinese candidates and the "vote one, get other MPs free" campaign of some candidates.

A tour of the Botany and Pakuranga electorates yesterday threw up some surprises.

The new Botany shopping centre is so large that, despite the car park being full, it felt nearly empty inside, where Asian and European New Zealanders were serving and shopping.

Howick Village had an intimate feel.

The focal point was the All Saints (Selwyn) Church, which was built in 1847 for the arrival of the first Fencibles (soldiers-settlers), the sign on the gate read.

At Jacob's Cafe, only the staff were Asian as I settled down next to Glad and Allan Jamieson. They are both in their 80s and have lived in the village for most of their married life.

They are committed National voters and will be voting for Mrs Wong and giving National their party vote.

But even they are starting to feel a bit peeved about the wave of new immigrants and new housing.

On the main street, Muzza's Pies seemed a good place to visit, given that I work with someone called Muzza who has a distinct liking for pies.

Although the eight people waiting to be served were Pakeha New Zealanders, the staff were Asian.

About 15 minutes' drive from the village, things are distinctly different.

At the Sommerville Shopping Centre, all of the 30 or so shops, services and restaurants have their signs written in mainly Mandarin but also in Korean and Japanese.

Two noodle shops have no signs in English.

The two bakeries display sweet cakes you would also see in Shanghai.

The Meatopia Butcher displays all its meat with Chinese character descriptions, and most of the other grocery-type outlets have their main signs in Asian characters with smaller English signs underneath.

It was difficult to try and talk about the election with the few shoppers at the Sommerville centre.

English was not their first language.

Around the centre, there were several small posters of Prime Minister Helen Clark with the words written in Korean.

Mr Wang, a former Act MP who is not on his party list, is telling voters that an electorate vote for him is a vote for Wang and Wong, because he says Mrs Wong will be returned to Parliament anyway on National's list.

Mr Kan, who is No 3 on his party's list, is saying that a split vote between Mr Wang and a party vote for the Kiwi Party will result in all three Chinese candidates becoming MPs.

Botany residents are split over whether it is good for candidates to be campaigning in languages other than English.

Some spoken to by Taking the Pulse said it was good that the Chinese candidates could talk to voters in their own language.

Others said they would prefer to have everything conducted in English but could not say that publicly in the electorate in case they were branded racist.

Pakuranga did not seem so Asian but it seemed elderly.

National Party MP Maurice Williamson is the long-time representative and looks sure to romp home again.

Heading back to South Auckland, where I am staying, proved easier than expected.

Once I started getting closer to the Manukau East electorate, signs of Labour MP Ross Robertson could be seen.

By keeping Mr Robertson's Labour signs on my left and Mrs Wong's National signs on my right, I soon found my base.

That aside, being endorsed by the Iceman, one of New Zealand's greatest flankers, is cool. 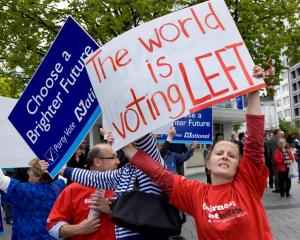 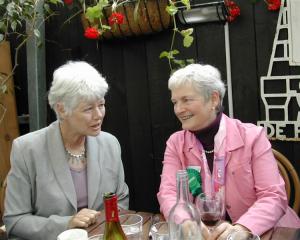 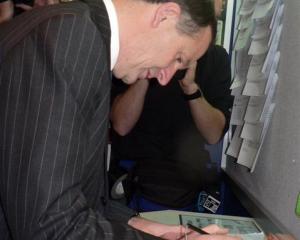 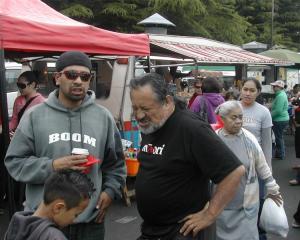 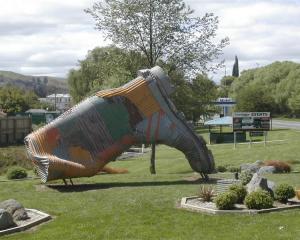