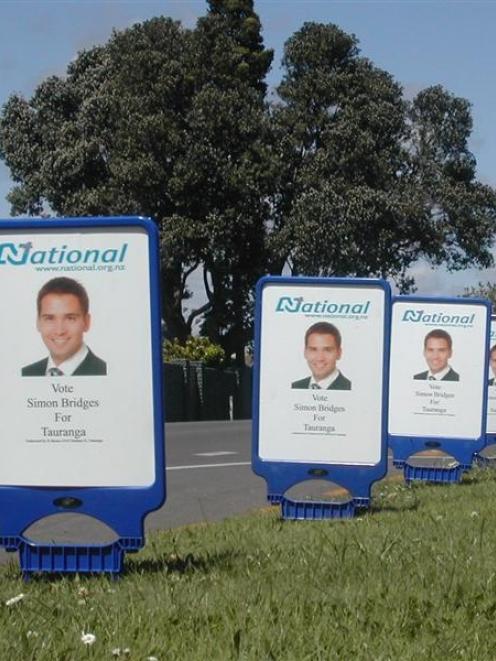 Simon Bridges aiming to be National's new face for Tauranga. Photo by Dene Mackenzie.
New Zealand First leader Winston Peters faces a voter backlash in Tauranga that could prove terminal unless his party squeaks across the 5% threshold and he can return to Parliament through the party vote.

There is a chance, albeit an outside one, that his law and order spokesman, Ron Mark, will win Rimutaka and take Mr Peters back into Parliament with him, but Mr Peters better not count on that.

At a meet-the-candidates night in Tauranga on Wednesday night, Mr Peters had to contend with hecklers calling out "baubles of office" as the stood-down foreign affairs minister tried to get his message across.

He was not above attacking National Party leader John Key either, attracting some hissing from people near where Taking the Pulse was sitting.

The meeting was a bit of a shambles, as meet-the-candidates meetings often are.

Two candidates not originally invited were eventually given two minutes to put their case.

One, Gray Eatwell, was introduced incorrectly as Gary Eatwell. Yesterday out campaigning, Mr Eatwell said mistakes were often made with his name, but he was pleased he got his moment in the limelight.

Taking the Pulse set an ambitious target of trying to talk to 100 Tauranga electorate voters but it was hard work.

Three years ago, I stood on the corner of Elizabeth and Grey Sts to ask voters about the election. Then, it was clear that although the contest would be tight, Mr Peters was going to lose to National Party candidate Bob Clarkson.

This time, voters are so annoyed with Mr Peters it appears National's Simon Bridges will romp in.

But it will not be that easy. Visiting Mr Peters' office in Elizabeth St felt like walking into a museum. I was almost too scared to touch anything in case the woman behind the desk told me off.

It was quiet although well appointed. A dedicated team of volunteers keep the flame of Mr Peters' campaign burning.

Outside the election meeting, three retired farmers (you could just tell from a distance) were in earnest conversation.

"So, Winston did well tonight," I volunteered.

The reaction could not have been stronger. Words that cannot be printed here were used to describe the MP for whom two had voted twice.

Richard (72) - he would not give his last name - believed he should give his vote to Act New Zealand this time, to get rid of Mr Peters once and for all.

When asked if he understood how to use the party vote strategically to change the government, he admitted he did not.

Neither did the other two. And that was part of the problem for other voters. They wanted National to win but were not going to vote National for the party vote, voting only for Mr Bridges.

Labour voters were on the money with their voting preferences. No splitting the vote for them.

At Cruza's Bar, in Otumoetai, the six Maori voters present at lunch time knew they were voting for Labour although they were not sure who the candidate was. (Anne Pankhurst) They, too, disliked Mr Peters.

National voters disliked Mr Peters for bringing Tauranga into the spotlight again and again over donations scandals and now whether or not he recommended billionaire Owen Glenn to be consul in Monaco.

Media have descended in droves on Tauranga at times and older people are feeling grumpy about the image their retirement town has around the country.

What was that image? National-leaning voters believed that Tauranga voters were seen as supporting all the bad things that were happening in Parliament.

Labour voters disliked Mr Peters for dragging Prime Minister Helen Clark into the donations scandals and "forcing her to defend that b . . .".

They hated the idea that Mr Peters could again be in Cabinet if Labour won the election.

At the RSA club, Mr Peters still had some loyal supporters.

The Gold Card had not proved too helpful for them, but the slogan "Seniors First" on Mr Peters' election signs meant a lot to those voters.

Mr Peters is shown in his election photos giving either the V for victory sign, or V as in "peace, man" from the 1970s.

It could mean two ticks for NZ First - it is not clear.

The field is crowded in Tauranga, with 11 candidates contesting the election.

Mr Baldock is the eternal optimist when it comes to campaigning, but he might secure enough votes from disgruntled NZ First voters who do not want to vote for either National or Labour to make life even more difficult for Mr Peters.

Mr Baldock does have a high profile in the area.

Back to the interviewing, the pulse of 87 voters had been taken when I called it quits. I accidentally strolled over the boundary into Bay of Plenty, the seat held by National's Tony Ryall.

NZ First deputy leader Peter Brown is standing in that electorate along with former South Otago woman Frances Denz, who is standing again for Act.

Mr Brown appears to be providing little help for Mr Peters in the campaign to get to 5%, but it was hard to tell if those being interviewed were being completely truthful.

A television network is planning a big-push poll into Tauranga at the weekend. Voters are already cringing. They have had enough of the media. The election cannot come fast enough for many people here.

One of the more interesting responses to the question of whom they would vote for came from some young women enjoying wine with their lunch down near the waterfront.

Mr Bridges was their choice because he was "hot".

On November 8, they will find out if he was hot enough.

• Prime Minister Helen Clark tried to distance herself from the smear attack on National Party leader John Key when it was revealed Labour Party president Mike Williams went to Australia on a dirt-digging exercise.

It is hard to believe she did not know why her party president went to Australia in the middle of the campaign.