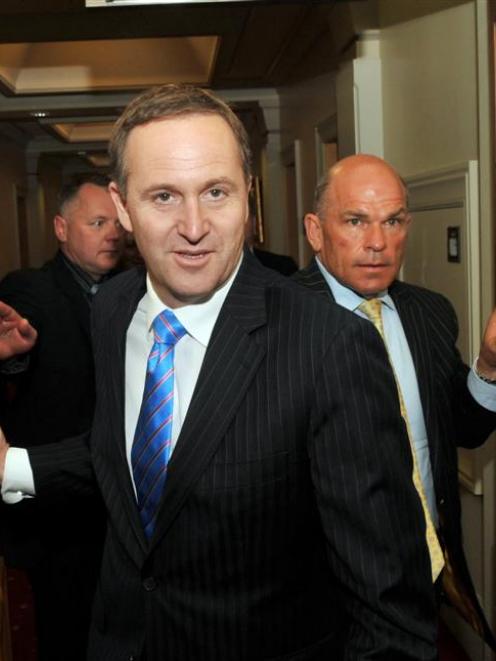 National and ACT have reached an agreement which gives incoming prime minister John Key the votes he needs to form a government.

At a meeting in Parliament today ACT's leader, Rodney Hide, pledged to support National on confidence and supply.

National won 59 seats in the election and ACT 5. Between them they have 64, a majority in the 122-member Parliament.

"I can confirm that there will be a National-led government," Mr Key told reporters after meeting Mr Hide.

"There's an assurance from the ACT Party that one way or another they will be supporting a National-led government."

They are not forming a coalition government and Mr Hide will hold a ministerial position outside cabinet, the same arrangement Labour worked out with Winston Peters when he was foreign minister.

Mr Hide's portfolio as a minister has not been decided and there are other aspects of the agreement still to be finalised at a meeting tomorrow.

Mr Key can now meet the basic requirement for forming a government and could go to Governor-General Anand Satyanand with proof of it.

He has said he wants to be sworn in as prime minister by next Monday so he can leave on Tuesday for the Apec summit meeting in Peru.

There could be a constitutional problem with that because special votes are still being counted and the election result is not official until the Chief Electoral Officer has returned the writ.

The Chief Electoral Officer has until November 27 to return it to the Governor-General.

National is taking legal advice on the situation.

Another reason Mr Key wants to form his government as quickly as possible is that he is anxious to start work on dealing with the deteriorating economic situation.

Mr Dunne is also expected to be given a ministerial position outside cabinet.

Mr Key does not need Mr Dunne or the Maori Party to be able to govern but he is bringing them in because he says he wants an "inclusive" government that is as broad based as possible.

Talks with the Maori Party are due to take place tomorrow.

Support arrangements like those that are being worked out allow minor parties to disagree with the Government on anything that is not directly linked to the ministerial position.

If ministers are part of cabinet they are bound by collective responsibility.

The crucial element of support agreements is that the minor parties vote with National on confidence and supply.

Confidence votes demonstrate a government's ability to prove that Parliament has confidence in it and apply to budget legislation.

Supply votes are routine and authorise the Treasury to release money for the public service. If a government loses a confidence or a supply vote it has to resign.