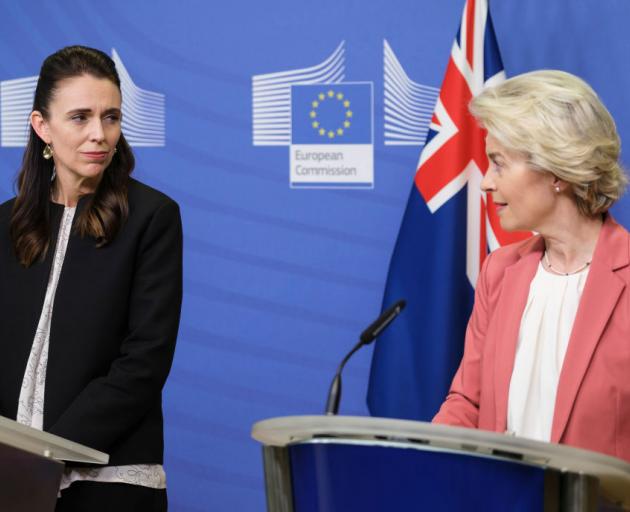 New Zealand Prime Minister Jacinda Ardern and the EU Commission's President Ursula von der Leyen talk to media after a bilateral meeting in the Berlaymont, the EU Commission headquarter in Brussels, Belgium. Photo: Getty Images
The Chinese embassy in Wellington hit back at remarks made by Prime Minister Jacinda Ardern at Wednesday's Nato leaders summit in Madrid, calling them "misguided" and "not helpful for deepening mutual trust".

In a statement, the embassy called Ardern's statement "wrong" and "regrettable".

Though New Zealand is not a member of Nato, a northern hemisphere defence alliance, Ardern was invited to attend its leaders summit in Madrid along with other leaders of the Asia Pacific Four: Australia, Japan, and South Korea.

In a speech to the summit, Ardern said: "China has in recent times also become more assertive and more willing to challenge international rules and more."

While the summit was focused on the war in Ukraine, Nato also published a new "Strategic Concept", which listed China as a threat.

Ardern's speech made a plea for peace and urged the international community to resolve disputes with diplomacy through multilateral institutions like the United Nations.

The Embassy said there was a "small number of countries" that sought to impose their will and "so-called 'values'" on China "under the guise of multilateralism".

The embassy said it took a "firm stand" against this, saying those countries were trying to bend international rules in their direction.

"It is those attempts that have eroded the foundation of multilateralism, undermined international peace and stability, and disrupted the joint efforts of international community in promoting sustainable development and addressing global challenge," the embassy said.

Ardern has recently voiced concerns at the "militarisation" of the Pacific, following China's security deal with Solomon Islands, and a leaked and ultimately unsuccessful attempt by China to sign a number of other Pacific nations up to a broader deal.

The embassy turned this back on New Zealand and suggested that if anyone was militarising the Pacific, it was members of the more western-aligned bloc, New Zealand, Australia, and almost certainly the United States.

"If there is indeed an escalation of tension in the Pacific, it cannot have been caused by China's cooperation with its island partners to advance sustainable development.

"Such cooperation has nothing to do with the "militarisation" of the region. If militarisation does exist in the South Pacific, it is clear to all who and what is fueling such tensions," the statement read.

China has taken to responding to remarks by Ardern it perceives as shifting New Zealand's foreign policy closer to the United States.

It issued a similar statement following Ardern's visit to the United States earlier this year.

Though the wording will likely make New Zealand uncomfortable from a trade perspective, it is unlikely to send Wellington into a panic. China has been known to send far more strongly worded statements if it has a serious concern.