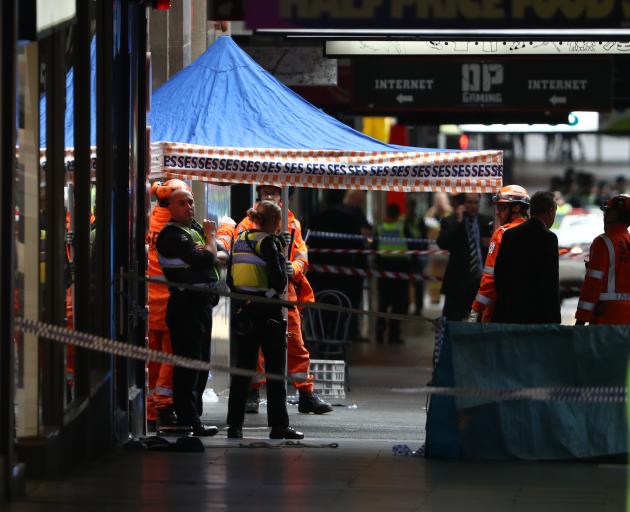 Police and scene examination personnel at the site of a homicide in Melbourne's CBD. Photo: Getty Images
A search continues in the Melbourne park where the eighth man to be shot dead in as many weeks in the city was found.

State Emergency Service volunteers and police returned to Fawkner Park at South Yarra on Sunday following the murder of a 41-year-old Carnegie man, whose body was discovered by two members of the public on Friday night.

The search comes after two guns were found at the park, reportedly by children.

Police believe the latest shooting was a targeted attack.

"There's no evidence to suggest it was a random shooting," Senior Sergeant Andrew Brady told reporters on Saturday.

"We want to reassure the public that Victoria Police is working towards successfully resolving this investigation."

Police have not confirmed whether they had identified any suspects and could not say what type of gun was used.

As of Sunday no arrests have been made.

It is the latest in a deadly two months on Melbourne's streets.

Eight men have died in six shootings since March 1 and charges have been laid for only three of the attacks.

Opposition leader Michael O'Brien said gun crime was out of control in Melbourne and police needed more resources and powers.

"The police need more support to infiltrate these gangs and get to the bottom of why this violence is happening."

"Illegal firearms have no place in our community and we're working with Victoria Police to target those who seek to use or acquire them," she said.

"Through our record investment in community safety, we're giving police the laws, resources and equipment they need to keep Victorians safe."

Since the prohibition orders came into place, 165 orders have been approved and of those more than 145 have been served on individuals, including outlaw motorcycle gang members, middle eastern crime gang members and counter terrorism persons of interest.

* MARCH 3: Mitat Rasimi, aged in his 50s, died after crashing his car into a pole at Dandenong, but police believe gunshots he received earlier caused his death. An arrest is yet to be made.

* APRIL 14: Security guard Aaron Khalid Osmani, 37, and patron Richard Arow, 28, die after being shot outside the Love Machine night club. No arrests made.

* APRIL 26: A 41-year-old Carnegie man is found dead at Fawkner Park at South Yarra. No arrests made.