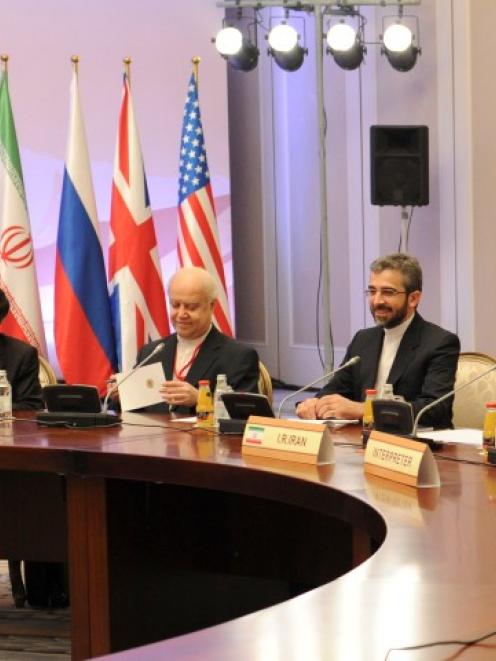 Members of the Iranian delegation, led by Supreme National Security Council Secretary and chief nuclear negotiator Saeed Jalili (2nd R), sit at a table during talks in Almaty, Kazakhstan. REUTERS/Ilyas Omarov/Pool
Iran was upbeat on Wednesday after talks with world powers about its nuclear work ended with an agreement to meet again, but Western officials said it had yet to take concrete steps to ease their fears of a secret weapons programme.

The United States, China, France, Russia, Britain and Germany offered to ease sanctions slightly in return for Iran curbing its most sensitive work, but had made clear they expected no breakthrough in the talks in Kazakhstan, the first in eight months.

U.S. Secretary of State John Kerry said the talks had been "useful" and that a serious engagement by Iran could lead to a comprehensive deal in a decade-old dispute that has threatened to trigger a new Middle East war.

Iran's foreign minister said in Vienna he was "very confident" a deal could be reached and its chief negotiator said he believed the Almaty meeting could be a "turning point".

The two sides agreed to hold expert-level talks in Istanbul on March 18 to discuss the offer, and return to Almaty for political discussions on April 5-6, when Western diplomats made clear they wanted to see substantive movement by Iran.

"Iran knows what it needs to do, the president has made clear his determination to implement his policy that Iran will not have a nuclear weapon," Kerry said in Paris.

A senior U.S. official in Almaty added: "What we care about at the end is concrete results."

Israel, assumed to be the Middle East's only nuclear-armed power, was watching the talks closely. It has strongly hinted it might attack Iran if diplomacy and sanctions fail to ensure that it cannot build a nuclear weapon. Iran denies any such aim.

Western officials said the offer presented by the six powers included an easing of a ban on trade in gold and other precious metals, and a relaxation of an import embargo on Iranian petrochemical products. They gave no further details.

In exchange, a senior U.S official said, Iran would among other things have to suspend uranium enrichment to a fissile concentration of 20 percent at its Fordow underground facility and "constrain the ability to quickly resume operations there".

This appeared to be a softening of a previous demand that Iran ship out its entire stockpile of higher-grade enriched uranium, which it says it needs to produce medical isotopes.

Iran says it has a sovereign right to enrich uranium for peaceful purposes, and wants to fuel nuclear power plants so that it can export more oil.

But 20-percent purity is far higher than that needed for nuclear power, and rings alarm bells abroad because it is only a short technical step away from weapons-grade.

Iran's growing stockpile of 20-percent-enriched uranium is already more than half-way to a "red line" that Israel has made clear it would consider sufficient for a bomb.

The U.S. official said the latest proposal would "significantly restrict the accumulation of near-20-percent enriched uranium in Iran, while enabling the Iranians to produce sufficient fuel" for their Tehran medical reactor.

Iran had previously indicated that 20-percent enrichment was up for negotiation if it received the fuel from abroad instead.

Chief negotiator Saeed Jalili suggested Iran could discuss the issue, although he appeared to rule out shutting down Fordow. He said the powers had not made that specific demand.

Western officials were aware that the closeness of Iran's presidential election in June is raising political tensions in Tehran and made rapid progress unlikely.

One diplomat in Almaty said the Iranians appeared to be suggesting at the negotiations that they were opening new avenues, but that it was not clear if this was really the case.

"Everyone is saying Iran was more positive and portrayed the talks as a win," said Iran expert Dina Esfandiary of the International Institute for Strategic Studies. "I reckon the reason for that is that they are saving face internally while buying time with the West until after the elections."

The Iranian rial, which has lost more than half its foreign exchange value in the last year as sanctions bite, rose some 2 percent on Wednesday, currency tracking web sites reported.