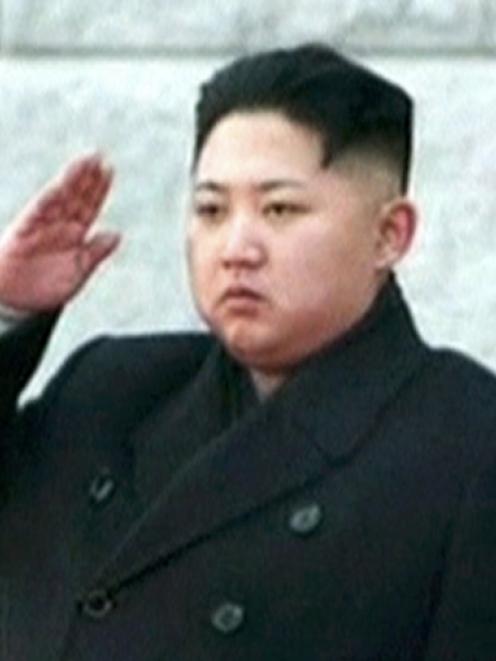 North Korea's new leader, Kim Jong Un, salutes during the funeral of late leader Kim Jong Il in Pyongyang yesterday. REUTERS/KRT via Reuters TV
Kim Jong Il's son and successor was declared "supreme leader" of North Korea's ruling party, military and the people during a memorial today for his father in the first public endorsement of his leadership by the government.

Hundreds of thousands packed the square in central Pyongyang, filling the plaza from the Grand People's Study to the Taedong River for the second day of funeral ceremonies for the late leader.

Kim Jong Il, who led his 24 million people with absolute rule for 17 years, died of a heart attack on December 17 at age 69, according to state media. He had taken power following the 1994 death of his father, North Korea founder Kim Il Sung.

Soon after Kim Jong Il's death, attention turned to his young son, who was revealed last year as his father's choice as successor.

Kim Jong Un, who is in his late 20s, serves as a vice chairman of the Central Military Commission of the ruling Workers' Party, but has been bestowed with a series of new titles in state media since his father's death: Great Successor, Supreme Leader and Sagacious Leader.

Kim Jong Un's leadership is not expected to become formal until top party, parliamentary and government representatives convene to confirm his ascension.

The events have been watched closely for signs to who will take power in the next era of leadership in the country founded by Kim Il Sung in 1948 and led since then by the Kim family.

On Wednesday, hundreds of thousands of mourners had lined the streets as Kim Jong Il's hearse had made its way through the snowy streets in a 2 1/2-hour-long funeral procession.