A man walks past a TV broadcasting a news report on the dismantling of the Punggye-ri nuclear testing site. Photo: Reuters

US President Donald Trump on Thursday (local time) called off a historic summit with North Korean leader Kim Jong Un scheduled for next month, citing Pyongyang's "open hostility," and warned that the US military was ready in the event of any reckless acts by North Korea.

Trump wrote a letter to Kim to announce his abrupt withdrawal from what would have been a first-ever meeting between a serving US president and a North Korean leader in Singapore on June 12.

"Sadly, based on the tremendous anger and open hostility displayed in your most recent statement, I feel it would be inappropriate, at this time, to have this long-planned meeting," Trump wrote. "Please let this letter serve to represent that the Singapore summit, for the good of both parties, but to the detriment of the world, will not take place."

It was a sudden end to weeks of optimistic statements from Trump that by meeting with Kim he might succeed where previous US presidents had failed and persuade North Korea to give up a nuclear weapons program that now threatens the United States.

Earlier on Thursday, North Korea had repeated its threat to pull out of the summit and warned it was prepared for a nuclear showdown with Washington if necessary.

White House officials said "the last straw" was a North Korean statement on Wednesday evening in which Pyongyang raised the possibility of a nuclear conflict if diplomacy failed and condemned US Vice President Mike Pence as a "political dummy."

"The North Koreans literally threatened nuclear war in the statement released last night," one of the officials said. "No summit could be successful under these circumstances."

US Secretary of State Mike Pompeo, who travelled to North Korea twice to prepare the summit, meeting Kim both times, said it was a disappointing development but "frankly not a surprise."

He said Pyongyang had not responded in recent days to queries about the meeting and Trump himself had made the decision to withdraw after meetings on Wednesday in which he concluded the summit would not be successful.

In a statement at the White House, Trump said he remained open to dialogue but had spoken to Defense Secretary Jim Mattis and warned North Korea against any "reckless act."

"We are more ready than we have ever been before," Trump said.

He said US allies South Korea and Japan also were ready to shoulder much of the financial burden "if an unfortunate situation is forced upon us" by North Korea.

"While many things can happen and a great opportunity lies ahead potentially, I believe that this is a tremendous setback for North Korea and indeed a setback for the world."

Asked if cancellation of the summit increased the risk of war, Trump replied: "We'll see what happens." 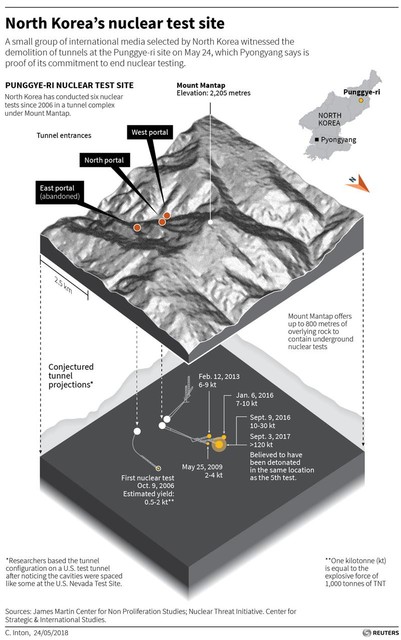 Trump said the United States would continue its "maximum pressure" campaign of sanctions to press North Korea to give up its nuclear weapons.

"North Korea has opportunity to end decades of poverty and oppression by following the path of denuclearisation, and joining the community of nations," he said.

Last month Trump had praised the authoritarian Kim as "very honorable" while preparing for the summit but the outlook for the meeting soured dramatically this month when North Korea angrily rejected the notion that it would agree to unilateral nuclear disarmament as Washington has demanded.

Trump cancelled the summit just a few hours after North Korea followed through on a pledge to blow up tunnels at its main nuclear test site, which Pyongyang said was proof of its commitment to end nuclear testing.

A small group of international media selected by North Korea witnessed the demolition of tunnels at the Punggye-ri site.

The apparent destruction of what North Korea said was its only nuclear test site had been widely welcomed as a positive, if largely symbolic, step. Kim has declared his nuclear force complete, amid speculation the site was obsolete anyway.

The Pentagon said it was too early to give an assessment of the action at Punggye-ri but experts say the site could be put back into service or re-established elsewhere.

A US official said the initial US assessment was that the entrance to the main mile-deep testing tunnel had been closed to a depth of about 20 meters (yards) and it would take some time to dig out the blockage if North Korea wanted to reopen the site.

South Korean President Moon Jae-in had worked hard to help set up the summit and said he was "perplexed" by its cancellation. He urged Trump and Kim to talk directly.

Moon had met with Trump at the White House on Tuesday and urged him not to let a rare opportunity for a meeting with reclusive North Korea slip away.

The reference to Pence that offended the White House came in a statement released by North Korean media citing Vice Foreign Minister Choe Son Hui. She called Pence a "political dummy" for comparing North Korea - a "nuclear weapons state" - to Libya, where Muammar Gaddafi gave up his unfinished nuclear development programme, only to be later killed by NATO-backed fighters.

"Whether the US will meet us at a meeting room or encounter us at nuclear-to-nuclear showdown is entirely dependent upon the decision and behavior of the United States," Choe said.

US national security adviser John Bolton first advocated a Libya as a model of North Korea's disarmament, incensing North Korea, which said it had its nuclear arms to ensure it did not end up like Libya.

Trump had further raised expectations for a successful summit after North Korea released three Americans this month, which he called in his letter "a beautiful gesture" by Kim.

While Trump's letter left the door open for talks with Kim, chances for a quick rescheduling appear remote and the cancellation will renew fears of a return to conflict on the Korean peninsula.

Trump's letter also referred to the possibility of war.

"You talk about your nuclear capabilities, but ours are so massive and powerful that I pray to God that they will never have to be used," he said.

North Korea's pursuit of nuclear weapons has been a source of tension on the Korean peninsula for decades, as well as antagonism with Washington, but escalated into fears of war last year after North Korea said it had tested an H-bomb and developed a missile capable of hitting the United States.

The rhetoric reached new heights under Trump as he mocked Kim as "little rocket man" and in address at the United Nations threatened to "totally destroy" North Korea if necessary. Kim had called Trump mentally deranged and threatened to "tame" him with fire.