US President Donald Trump and North Korean leader Kim Jong Un are expected to land in Singapore today within hours of each other in advance of a historic summit over the reclusive country's arsenal of nuclear weapons.

The US delegation, en route from the G7 meeting in Canada, will arrive Sunday evening, and Trump is set to meet with Singapore's Prime Minister Lee Hsien Loong on Monday.

Trump is scheduled to arrive at Singapore's Paya Lebar Airbase at 8.35pm on Sunday and go to the Shangri-La Hotel, according to the White House.

A direct flight from Pyongyang landed in Singapore on Saturday, raising speculation that a delegation of North Korean officials had joined an advance team headed by Kim's close aide, Kim Chang Son, who was in Singapore to prepare for the talks.

An Il-76 cargo plane that accompanied Kim Jong Un on his most recent visit to China departed Pyongyang on Sunday morning, bound for Singapore.

At stake at the summit are North Korea's nuclear weapons and peace on the Korean Peninsula. North Korea spent decades developing nuclear weapons, culminating in the test of a thermonuclear device in 2017. It also successfully tested missiles that had enough range to reach the US mainland.

The tests came amid a campaign of "maximum pressure," led by the United States, that tightened economic sanctions against North Korea and raised the possibility of military action.

In a New Year's address, Kim said his country had completed development of its nuclear programme and would focus on economic development, suggesting a meeting with South Korea.

After a flurry of contacts between the two Koreas, South Korean officials suggested to Trump in March that Kim would be willing to meet face-to-face.

The summit comes after weeks of sometimes-contentious discussions and was briefly cancelled amid North Korean outrage over messaging from some US advisers.

Many remain sceptical Kim will ever completely abandon his nuclear programmes. They believe his latest engagement is aimed at getting the United States to ease crippling economic sanctions that have squeezed the impoverished country.

For Trump, a successful summit will see him achieve badly needed kudos on the international stage ahead of congressional elections in November. 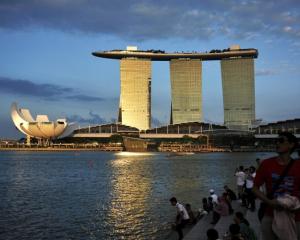 Kiwi jailed in Singapore for attack on girlfriend