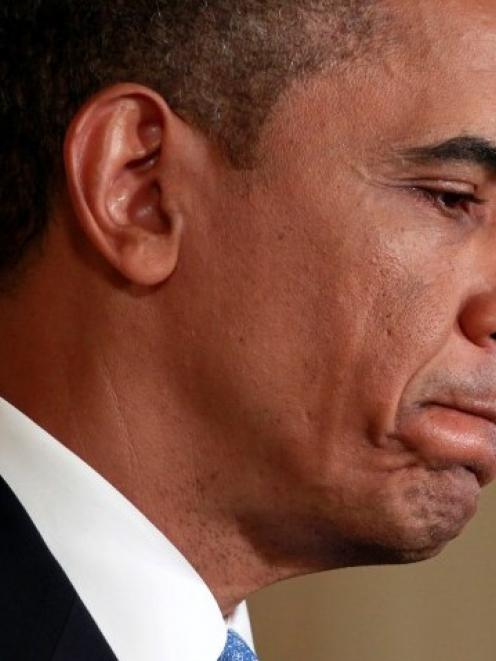 US President Barack Obama takes part in a news conference in the East Room of the White House in Washington. REUTERS/Jason Reed
President Barack Obama has rejected any negotiation with Republicans over the most pressing US fiscal issue, refusing to trade cuts in government spending in exchange for raising the borrowing limit.

"If the goal is to make sure that we are being responsible about our debt and our deficit - if that's the conversation we're having, I'm happy to have that conversation," Obama said. "What I will not do is to have that negotiation with a gun at the head of the American people," he told a news conference.

Republican leaders quickly reiterated their demand that increasing the debt limit must be accompanied by spending cuts.

A trio of deadlines looms around the end of February: the need to raise the debt ceiling, automatic deep spending cuts temporarily put off in the fiscal cliff deal, and the end of a stopgap government funding measure.

The United States could default on its debt if the borrowing limit is not increased.

Some Republicans have said they would require dollar-for-dollar spending cuts to match any increase in the debt limit. Obama's unexpected news conference could have been a pre-emptive strike aimed at influencing strategy sessions among Republican lawmakers scheduled for later this week.

A number of Republicans have said they would be willing to allow a US debt default or a government shutdown to force the Obama administration to accept deeper spending cuts than the White House would like.

Obama said he would agree to talk about steps to trim the US budget deficit, but made clear he wants to keep that discussion separate from the debt ceiling increase. He held to his position that deficit reduction should include measures to raise revenue and not come from spending cuts alone.

Republicans have rejected that approach, saying the fiscal cliff deal, which raised taxes for the wealthy while maintaining low tax rates for most Americans, should have put to rest the discussion over tax increases.

Obama must get "serious about spending and the debt limit is the perfect time for it," Senate Republican leader Mitch McConnell said in a statement just moments after Obama's news conference ended.

Republican John Boehner, the House of Representatives speaker, said: "The American people do not support raising the debt ceiling without reducing government spending at the same time."

If Congress fails to raise the US debt limit, the Treasury Department will become unable to borrow money to pay for government spending obligations, leading to a debt default that would damage US credit and have wide repercussions in financial markets around the world.

Protracted haggling over raising the debt ceiling in 2011 brought the nation close to default and resulted in a credit rating downgrade and financial market turmoil that slowed economic recovery.

Fiscal issues loomed large during the final news conference of Obama's first term, which came a week before a gala inauguration ceremony that will launch his next four years. Fights with Congress over taxes and spending have overshadowed much of his domestic agenda over most of the last two years with the president facing legislative gridlock that shows little sign of abating.

Obama raised the specter of a severe setback to the US economy if congressional Republicans persist with the threat of a debt default.

"It would be a self-inflicted wound on the economy," he said. "Even entertaining the idea of this happening, of the United States of America not paying its bills, is irresponsible. It's absurd."