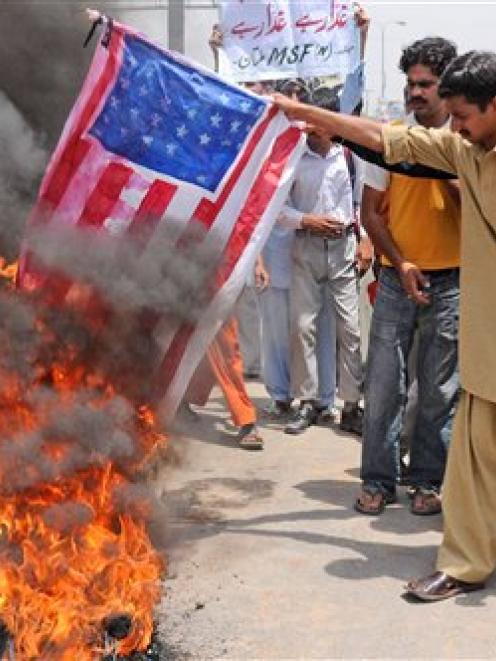 Supporters of Pakistan's Muslim League burn a representation of the US flag during a demonstration in Multan, Pakistan. (AP Photo/Khalid Tanveer)
Suspicion has risen that Pakistan's intelligence service leaked the name of the CIA chief in Islamabad to local media in anger over the raid that killed Osama bin Laden - the second outing of an American covert operative here in six months.

The US said it has no plans to pull the spy chief, but the incident is likely to exacerbate an already troubled relationship between the two countries a week after Navy SEALs in helicopters swooped down on bin Laden's compound without first telling the Pakistanis. The CIA and Pakistan's spy agency have long viewed each other with suspicion, which the death of the terror leader has laid bare.

The Pakistani military and intelligence services have suffered withering criticism at home for failing to stop the US operation. Many Pakistanis view the raid as a violation of their sovereignty - even if they were pleased that bin Laden was killed.

US officials have said they didn't tell Pakistanis in advance because they were worried someone might tip off bin Laden. American forces also used helicopters with radar-evading technology so the Pakistanis couldn't track them.

Pakistani Prime Minister Yousuf Raza Gilani defended the military and intelligence services on Monday, telling parliament it was "disingenuous for anyone to blame Pakistan ... for being in cahoots with al-Qaeda."

He acknowledged his nation's failure to track bin Laden but said the failure wasn't Pakistan's alone.

"Yes, there has been an intelligence failure," Gilani said. "It is not only ours but of all the intelligence agencies of the world."

US officials have said they see no evidence that anyone in the upper echelons of Pakistan's military and intelligence establishment was complicit in hiding bin Laden in Abbottabad, an army town only 60km from the capital. But suspicions remain, and members of Congress have threatened to cut off US aid if evidence is found.

President Barack Obama said the US believes bin Laden must have had a support network inside Pakistan.

Gilani proclaimed the death of bin Laden as "indeed justice done" since al-Qaeda has launched many attacks inside Pakistan. But he warned the US not to try a similar covert raid in the future.

"Unilateralism runs the inherent risk of serious consequences," Gilani said. "Pakistan reserves the right to retaliate with full force. ... No-one should underestimate the resolve and capability of our nation and armed forces to defend our sacred homeland."

At the same time, however, he stressed the importance of Pakistan-US ties and insisted the relationship was still strong.

"Our communications at the official and diplomatic levels with the US, during this phase, have been good, productive and straightforward," said Gilani.

Gilani's speech and the suspected leak of the CIA station chief's name illustrate the balancing act that Pakistani officials seem to be trying to achieve in responding to the bin Laden raid.

Civilian and military leaders must placate a domestic population that is upset at the US for violating the country's sovereignty and outraged at the country's army and intelligence agency for allowing it to happen. But they must also worry about preserving their relationship with the US, which provides billions of dollars in military and civilian aid for co-operation on the war in Afghanistan.

"Gilani's statement and the leak of the name of the name of the supposed CIA station chief appear to be in keeping with Islamabad's need to maintain relations with the United States and at the same time try and counter growing US pressure in the wake of the Osama bin Laden killing," said Kamran Bokhari, an analyst with STRATFOR, a private security think tank in Austin, Texas.

Even before the discovery of bin Laden, many US officials accused Pakistan of playing a double game by taking American aid, promising its support and then failing to target key Islamist militants wanted by the US, including Taliban chief Mullah Mohammed Omar.

But the US is in a difficult position because it is reliant on Pakistan's help to go after Taliban militants on its territory and ships a large percentage of its non-lethal goods to its forces in Afghanistan through the country. Pakistan also allows the CIA drones to carry out missile strikes on militant targets in the border regions. Pushing Pakistan too hard could jeopardize the relationship with the critical, if fickle, ally.

On Friday, the private TV channel ARY broadcast what it said was the current CIA station chief's name. The Nation, a right-wing newspaper, picked up the story on Saturday.

Although the name was misspelled, the publication of any alleged identity of the US spy agency's top official in this country could be push-back from Pakistan's powerful military and spy agency in retaliation for the American raid.

The Associated Press is not publishing the station chief's name because he is undercover and his identity is classified. A spokesman for Pakistani intelligence declined to comment.

ARY's news director, Mazhar Abbas, said the television station's reporter gleaned the name from a source. He defended the broadcast, saying it was "based on fact" and rejected suggestions the name was leaked to the television channel by an official with a motive.

A US official, speaking on condition of anonymity because of the sensitivity of discussing CIA personnel issues, told the AP that there are no plans to remove the station chief from Pakistan.

Asad Munir, a former intelligence chief with responsibility for Pakistan's militant-populated tribal areas, said very few people know the name of the CIA station chief in Islamabad. But he said that releasing it would not necessarily jeopardize the American's safety.

"Normally people in intelligence have cover names," Munir said. "Only if there is a photograph to identify him could it put his life in danger."

In December, the CIA pulled its then-station chief out of Pakistan after a name alleged to be his surfaced in public and his safety was deemed at risk. That name hit the local presses after it was mentioned by a lawyer who planned a lawsuit on behalf of victims of US drone strikes in Pakistan's tribal belt.

Suspicions have lingered that that outing was orchestrated by Pakistan's spy agency to avenge an American lawsuit that named its chief over the 2008 terror attacks on the Indian city of Mumbai. The Pakistani agency denied leaking the CIA operative's name.