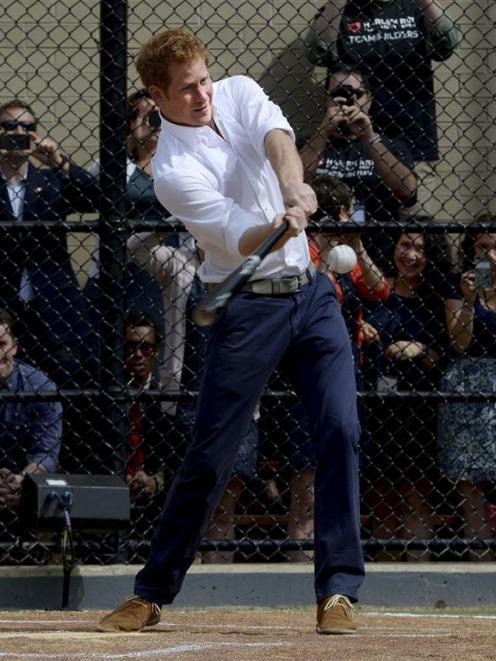 Britain's Prince Harry hits a baseball while participating in a baseball clinic in New York. REUTERS/Justin Lane/Pool
Prince Harry praised "that great American spirit" during his tour of the recovering Jersey Shore, where crews were dismantling a landmark roller coaster - a symbol of Superstorm Sandy's destruction.

Cheers erupted from the crowd assembled on the freshly cut boardwalk as the prince and his escort, New Jersey Governor Chris Christie, shook hands with residents of storm-battered beach towns, cleanup volunteers and local officials.

Prince Harry told one woman that the region's determination to rebuild showed "that great American spirit," and assured others the East Coast summer playground would thrive once again.

"You're going to have thousands of people here, and you need to get ready," the soft-spoken royal told Jennifer Maier, she said. Maier is borough administrator of hard-hit Union Beach, which lost 220 homes in the October 29 storm.

Visible in the ocean behind them was the towering frame of the Jet Star roller coaster, washed out to sea by Sandy and being dismantled and removed by crews more than six months later.

Chilly sea breezes carried the scent of fresh-cut lumber over the gathering of about 100 spectators - and even more reporters, photographers and TV crews. They pressed against metal barricades draped with the red, white and blue British Union Jack.

"It's great exposure for the Shore," said Roger Gibson, 27, a manager of a boardwalk staple, Jimbo's Bar & Grill. "It lets people know we are open and ready for business."

Crews on Tuesday began dismantling and removing the Jet Star and other amusement park rides submerged nearby. The cleanup was expected to take about 48 hours, according to Casino Pier, which owns the rides.

"We are here to say goodbye," said Kim Stone of Bayville, New Jersey.

"Life as an amusement park ride is over for the Jet Star, but we are keeping a piece for a memorial on the pier," said Casino Pier spokeswoman Toby Wolf.

A section of the pier, including rides, will open this summer while the full rebuilding is slated for 2014.

Sandy slammed into New Jersey on October 29, ravaging the coastline, causing $30 billion in damage. Prince Harry and Governor Christie began their tour in Mantoloking, a narrow barrier island community between New Jersey and the Atlantic Ocean, where all 521 houses were affected.

When Jersey Shore residents were evacuated, most expected they would return after a few days and were stunned when the devastation turned out to be so severe that it would be months before they could go home.

More than 130 people throughout the U.S. Northeast died as a result of the storm.

Before Prince Harry left the Seaside Heights boardwalk, he peeled away from the crowd and spoke with Taylor Cirigliano, 11, and her sister Allie, 7, of Middletown.

They were lamenting their lack of success at a boardwalk "ball toss," where players try to toss a ball into progressively smaller cups in order to win a prize.

"We are going to win you something," Prince Harry told Taylor, she said.

With a couple of tosses of the ball, Prince Harry snagged a stuffed blue elephant and a Hello Kitty doll and handed them over to the beaming girls.