Williams, who has previously sung at private parties organised by wealthy Russians, told Reuters he liked visiting the country and performing at the opening ceremony was an honour.

A long-time Kremlin critic lambasted Robbie Williams for deciding to sing at the World Cup opening ceremony in Moscow on Thursday (local time), while a campaign group offered to brief the British pop star on Russia's human rights record.

British businessman Bill Browder, who accuses President Vladimir Putin of conducting a personal vendetta against him, took to Twitter to question why Williams was performing while Russia was under western sanctions.

"There's lots of ways to make money @robbiewilliams, but selling your soul to a dictator shouldn't be one of them. Shame on you," Browder wrote.

There’s lots of ways to make money @robbiewilliams, but selling your soul to a dictator shouldn’t be one of them. Shame on you. This message is on behalf of Sergei Magnitsky, Boris Nemtsov, Anna Politkovskaya, Natalia Estimirova, victims of MH17, 10,000 dead Ukrainian soldiers... https://t.co/gnpKHoUxrD— Bill Browder (@Billbrowder) June 12, 2018

Russia is keen to use the soccer tournament to signal that despite the sanctions, imposed over its 2014 annexation of Crimea and role in a rebellion in eastern Ukraine, it remains a top player on the global stage.

The singer's PR team declined comment. However, Williams, who has previously sung at private parties organised by wealthy Russians, told Reuters he liked visiting the country and performing at the opening ceremony was an honour.

US-born Browder was once a major investor in Russia. He has led a campaign to expose corruption and punish officials he blames for the 2009 death of Sergei Magnitsky, a lawyer he employed, in a Moscow prison.

The US Treasury Department subsequently imposed its own sanctions under a 2012 law known as the Magnitsky Act.

Human Rights Watch said it had called on world leaders to stay away from the event, pointing to Russia's rights record and its role in the Syrian war.

"We certainly see the way the Russian government and President Putin is using the World Cup and in particular the opening ceremony as a way of legitimising his power and his authority," the group's director for Europe and Central Asia, Hugh Williamson, said.

"We'd be happy to brief (Williams) on the human rights situation in Russia ... so that he's well informed when he gets there. He could also make a positive contribution if he speaks out during his visit," he added.

The tournament kicks off on Thursday with a match between Russia and Saudi Arabia. 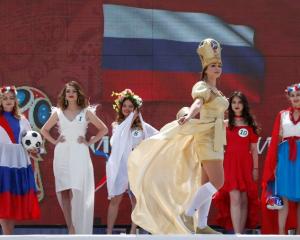