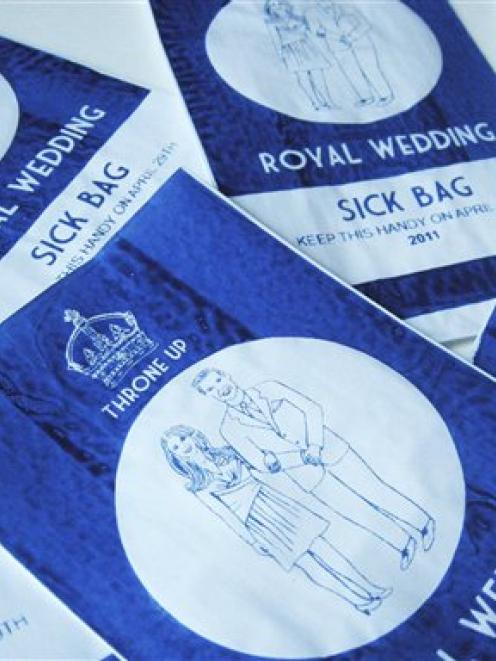 A Royal Wedding souvenir for those who are less that enthusiastic about the forthcoming wedding of Britain's Prince William and Kate Middleton - a special edition sick bag. (AP Photo/Lydia Leith, ho) ED
Fancy a royal wedding condom? Or maybe a commemorative sickbag?

The April wedding of Prince William and Kate Middleton has spawned a cottage industry of inappropriate souvenirs.

For ladies and gentlemen who wouldn't dare touch anything that hadn't personally been approved by the princely couple, the Royal Collection sells handmade tankards, plates and pill boxes in English fine bone china, complete with William and Middleton's entwined initials in gold and silver.

But online and in stores, entrepreneurs are cashing in on the inevitable popular backlash against royal wedding mania.

Most infamous are the royal wedding-themed condoms - an online sensation that featured prominently on the website of celebrity-obsessed OK! Magazine. William and Kate ashtrays allow smokers to rub their butts out in the face of the royal couple.

Then there are the William and Kate barf bags, made by Newcastle-based designer Lydia Leith. They feature a picture of the couple underneath the words "Throne Up."

Leith, 24, told The Associated Press that she wanted to go about "poking fun at a social occasion from one side or another."

"The sick bags aren't specifically political, or at least weren't made as a dig," she said in an e-mail. "I wanted to contribute to the tradition of what I see as a very British humour."

A spokeswoman for the Royal Collection said the royals had no control over the rash of unauthorised souvenirs.