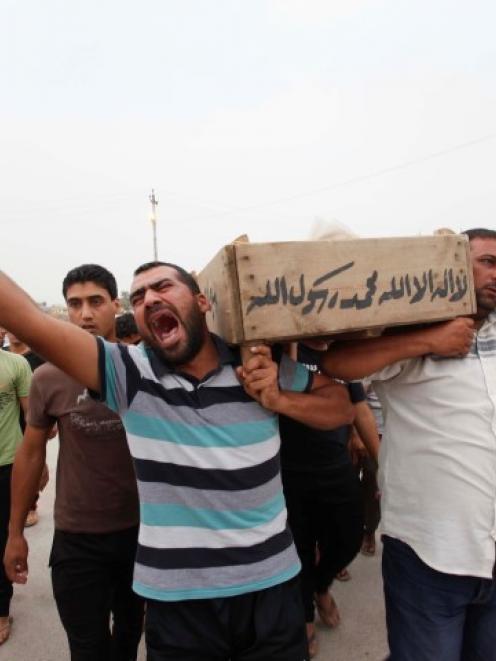 Relatives carry the coffin of an Iraqi police officer killed by militants, during a funeral in Najaf, around 160km south of Baghdad. REUTERS/Haider Ala
More than 70 people have been killed in a series of car bombings and suicide attacks targeting Shi'ite Muslims across Iraq, police and medics say, extending the worst sectarian violence since US troops withdrew in December 2011.

The attacks increased the number killed in sectarian clashes in the past week to more than 200. Tensions between Shi'ites, who now lead Iraq, and minority Sunni Muslims have reached a point where some fear a return to all-out civil conflict.

No group claimed responsibility for the bombings. Iraq has a number of Sunni Islamist insurgent groups, including the al Qaeda-affiliated Islamic State of Iraq, which has targeted Shi'ites in a bid to kindle a wider sectarian conflagration.

Nine people were killed in one of two car bombings in Basra, a predominantly Shi'ite city 420km southeast of Baghdad, police and medics said. "I was on duty when a powerful blast shook the ground," said a police officer near the site of that attack in the Hayaniya neighbourhood.

"The blast hit a group of day labourers gathering near a sandwich kiosk," he said, describing corpses littering the ground. "One of the dead bodies was still grabbing a blood-soaked sandwich in his hand."

Five other people were killed in a second blast inside a bus terminal in Saad Square in Basra, police and medics said.

In Baghdad, at least 30 people were killed by car bombs in Kamaliya, Ilaam, Diyala Bridge, al-Shurta, Shula, Zaafaraniya and Sadr City - all areas with a high concentration of Shi'ites.

A parked car bomb also exploded in the mainly Shi'ite district of Shaab in northern Baghdad, killing 12 people and wounding 26 others, police and hospital sources said.

In Balad, 80km north of Baghdad, a parked car blew up near a bus carrying Shi'ite pilgrims from Iran, killing five Iranian pilgrims and two Iraqis who were travelling to the Shi'ite holy city of Samarra, police said.

Eleven people were killed by a car bomb and a suicide bomber in Hilla, 100km south of Baghdad, police and medics said. Both attacks occurred near a Shi'ite place of worship and an outdoor market.

In the western province of Anbar, the bodies of 14 people kidnapped on Saturday, including six policemen, were found dumped in the desert with bullet wounds to the head and chest, police and security sources said.

When Sunni-Shi'ite bloodshed was at its height in 2006-07, Anbar was in the grip of al Qaeda's Iraqi wing, which has regained strength in recent months.

In 2007, Anbar's Sunni tribes banded together with U.S. troops and helped subdue al Qaeda. Known as the "Sahwa" or Awakening militia, they are now on the government payroll and are often targeted by Sunni militants as punishment for co-operating with the Shi'ite-led government.

Three Sahwa members were killed in a car bomb explosion as they collected their salaries in the city of Samarra, north of Baghdad, police said.

And a suicide bomber wearing an explosive belt detonated himself at a Sahwa checkpoint, killing two fighters and wounded another seven in Baiji, 180km north of Baghdad.

Iraq's fragile intercommunal fabric is under increasing strain from the conflict in nearby Syria, which has drawn Sunni and Shi'ite Muslims from across the region into a proxy war.

Iraq says it takes no sides in the conflict, but leaders in Tehran and Baghdad fear Assad's demise would make way for a hostile Sunni Islamist government in Syria, weakening Shi'ite influence in the Middle East.

The prospect of a shift in the sectarian balance of power has emboldened Iraq's Sunni minority, which is embittered by Shi'ite dominance since the overthrow of Saddam Hussein by U.S.-led forces in 2003.

A raid by the Iraqi army on a protest camp in the town of Hawija last month ignited a spate of violence that left more than 700 people dead in April, according to a U.N. count, the highest monthly toll in almost five years.

At the height of sectarian violence in 2006-07, the monthly death toll sometimes topped 3,000.