By Andrew Marshall
0 Comments
Thursday night was a sleepless one for Ukrainian expatriate Olha Viazenko as she kept in touch with her mother in Ukraine’s capital city, Kiev.

Since news of the invasion broke, Mrs Viazenko said she had been in shock, and her thoughts turned to the plight of her mother.

"She was alone in her flat and she heard the shelling, she heard explosions, and she’s really scared.

"Now, of course, she pretended she is not but we understand she’s really scared."

Mrs Viazenko, who came to New Zealand three years ago and moved to Dunedin in 2021, said she had been in regular contact with friends and family since the news of the invasion broke, and was trying to provide what support she could from the other side of the world.

One part of this support is a protest which is being held by members of the Ukrainian community in Dunedin in the Lower Octagon at noon today.

She said the protest was open to everyone who wanted to show support for the plight of the population of her home country.

She had appreciated the many messages of support she and her family had received from New Zealand friends since the news broke, and hoped for a good turnout of people at the protest.

Varvara Pokusai has lived in New Zealand for four years, and came to Dunedin to study. 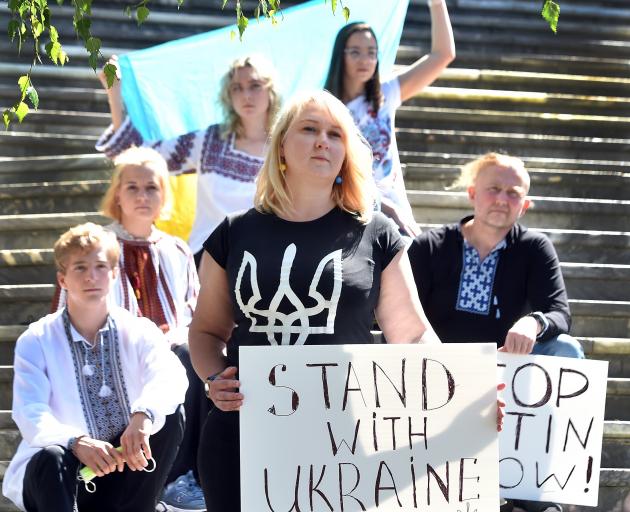 She remembered the 2014 revolution in Ukraine and said it had been "very, very scary".

This week’s invasion felt far more intense than that, and she was worried for friends and family back in Ukraine.

"Unfortunately I can’t stay with them 24/7 on the phone, so sometimes its scary, like I don’t know what’s happening.

Anastasiia Viazenko, who came to New Zealand from the Western Ukrainian city of Lviv, said the invasion had been very disturbing.

"A lot of my family still lives in Ukraine, and a lot of my friends are staying right now on the front line."

She said she was focused on doing what she could to support Ukraine from afar, including supporting the protest and donating money towards medicine and clothes for the Ukrainian people.

The letter calls on the ambassador to ask Russian President Vladimir Putin to cease and desist the Ukrainian invasion.

"If you can not do this, then perhaps you should consider severing your ties with New Zealand and return to the Federation of Russia."