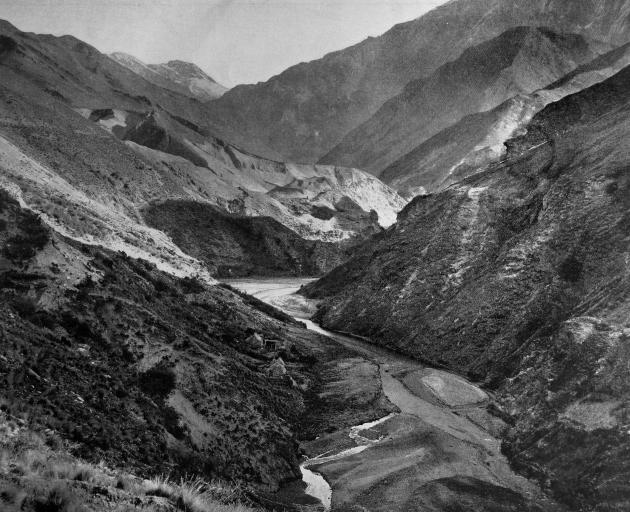 The Moke Creek Gorge, Wakatipu district. - Otago Witness, 18.11.1919.
The population of New Zealand can be taken as almost entirely British in race, and in sentiment wholly British.

Of the total population of one and a-quarter millions almost all were born in Great Britain and Ireland or in New Zealand or other of the self-governing dominions.

For statistical purposes it is customary to differentiate between Europeans and Maoris in New Zealand, but the Maori is as British in sentiment and ideals as any other native-born New Zealander.

He lives practically on the same scale, works side by side with men of the British races, is treated with the respect due from one Briton to another, and is in all points on an equality with Britons. It is conceded that the Maori has every right to be considered as British as any Englishman or Scotsman. He is, therefore, included in its white population.

The foundations of the population of New Zealand were laid by carefully-selected emigrants from Scotland as to Otago, from England as to Canterbury, and by English, Scotch, and Irish, and Nova Scotians in other parts of the dominion. Gold diggings in Otago and on the West Coast attracted large numbers of pure British-born miners and others from Australia.

But no one was ever transported to New Zealand, as it was never used for penal purposes. Its first missionaries were English, and it is correct for all practical purposes to regard the people of New Zealand to-day as essentially British.

The work of lengthening the railway and traffic bridges over the Mataura River at Gore has been considerably hampered by a prolonged period of wet weather. The concrete piles for the traffic bridge are in position, and the men are now engaged building those for the railway bridge.

A visitor cannot help hoping that the project will be as beneficial as is hoped, for it has utterly destroyed the natural beauty of the place. Gone are the tall green willow trees that lined the river banks as far as the eye could see, and in their place is nothing but bareness, and the litter of dead wood.

The scene of the operation presents a workmanlike if unattractive sight, with its piles of gravel and portions of excavated ground, rails, tools, and piping lying around at random, and the big concrete mixer keeping watch over the whole.

Several houses just below the railway bridge, on the east bank of the river, have already been removed, and on the opposite shore a protective bank has been built up for several chains. When the work is completed what is now known as the low road to East Gore will cease to exist.

''Aquatic'' does not believe that groynes would prove effective in preventing the destruction that is going on at the Ocean Beach.

His observations, extending over a number of years, show that the sand comes and goes according to the set of the currents, and if it were possible to take soundings it would be found that when the beach is at its lowest sand level the sand has formed in bars at no great distance out.

He has also noticed that the receding waves or back currents cause far more scour round the groynes than takes place on other parts of the beach where there are no groynes.

You are controversial. There's been a War. European empires have fallen. Britain is 15 thousand miles away. It has lost its greatest generation.

Oh, go away. I'm angry with your tuppenny ha'penny rag.