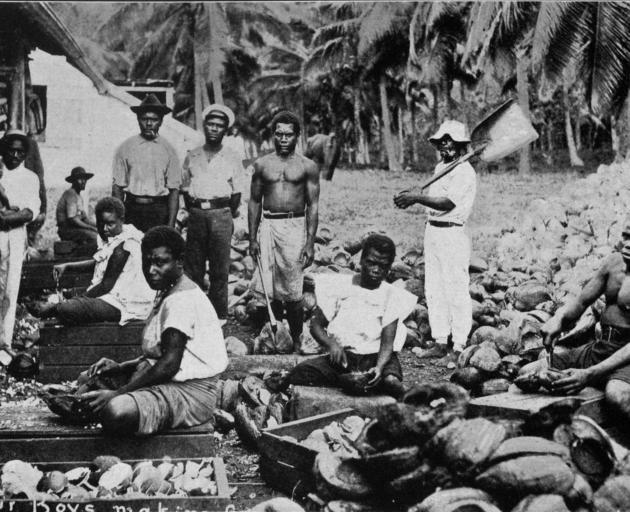 Labour boys making copra in Samoa. - Otago Witness, 14.5.1919
For some time past it has been known in the city that the departmental authorities in charge of Te Oranga Home for fallen girls have been quietly discharging the inmates, until recently the home was completely closed.

It is understood that the most emphatic protests have been made against this course by persons intimately connected with reformatory work; but the Education Department has ignored the protests, and in consequence some very interesting developments are expected in the matter.

A gentleman connected with reformatory work told a Lyttleton Times reporter on Wednesday that words were inadequate to condemn the action of the authorities.

The young women from Te Oranga were mostly sexual degenerates, but they had been gradually liberated until the institution, which once contained 80 inmates, was now empty. Girls had been sent out to service, and many of them had been convicted in the courts since their discharge.

The policy was absolutely wrong. A police officer expressed the view that the liberation of the Te Oranga girls was one of the worst pieces of work perpetrated in Christchurch for many years. He added that none of the girls should be admitted to domestic service, and mistresses would not have them in the house if they knew their records.

Further inquiries elicited the allegation that over 40 girls who were under the age of 21 years had been put out to domestic service or otherwise liberated from the institution.

Mr William Adams, who died at his residence at St. Clair, on Wednesday, had had a very wide experience of hydraulic sluicing and dredging in many parts of the dominion. He was a native of Lisneskea, County Fermanagh, Ireland, and arrived in Auckland in 1863.

He immediately became engaged in engineering work, erecting quartz crushing batteries, and acting as overseer. He left Auckland, and erected and managed the first hydraulic sluicing and elevating plant in the dominion at far-famed Gabriel's Gully. Later he took up the position of working manager of the Island Block Sluicing claim, and of the Island Block Extended Company.

Then he became associated with Messrs Smyth and Donlan, and started hydraulic sluicing at Wetherstone's Flat. About this time the dredging boom was at its height, and Mr Adams became interested in many of the concerns which for a time made the Molyneux famous. He had interests in plants from Tuapeka Mouth right up the river to Bendigo, and for a time owned the Bendigo quartz mine and plant.

His last work was in connection with removing the machinery from the dredge Pride of Clutha, and he was employed in these operations till the last few weeks, when he was attacked with heart trouble.

Mr Adams was a man of indefatigable energy and infinite resource, and the gold-mining industry of Otago has without doubt, by his death lost one of its strongest supporters.

A writer in Country Life recalls the story told by his mother of Bishop Selwyn, who declared that he could sleep comfortably upon anything.

He had only once in his life been uncomfortable to sleep, and that was when going down the Lower Waikato River in a canoe half full of eels. The eels would wriggle so much that he really could not sleep when lying upon them.

Sexual degenerates? Did they 'Fall' from the upper classes?