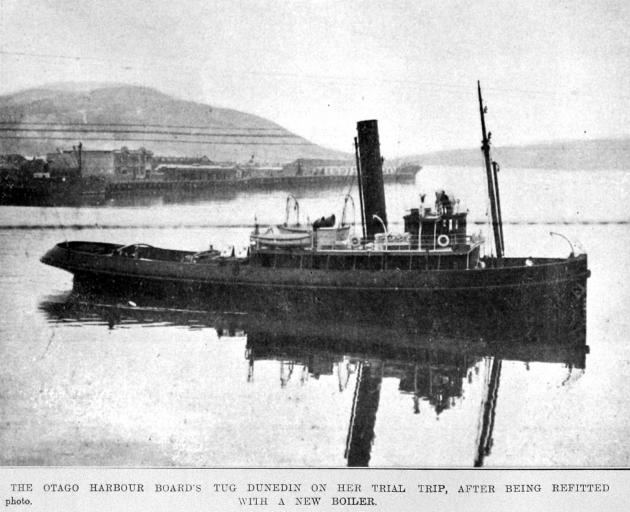 The Otago Harbour Board tug Dunedin on a trial trip on May 11, 1921 after being refitted with a new boiler. — Otago Witness, 31.5.1921.
The tug Dunedin, which went out of commission in April, 1918, in consequence of her boilers being condemned, is once again almost ready for active service.

The Babcock and Wilcox boiler order by the Harbour Board through Messrs John Chambers and Son came to hand a few months ago, and the work of installing it having been completed the Dunedin steamed down the harbour at midday yesterday to Port Chalmers.

She is to go into dock to have her propeller shaft drawn for inspection, and will also be repainted.

This work will be completed by about Tuesday or Wednesday of next week. The total cost of purchasing the new boiler and installing it runs into between £9000 and £10,000.

One of the provisions of the will of the late Mr William Harrop, who left such a handsome sum of money to be devoted to the purpose of erecting a new Anglican Cathedral in Dunedin, was that a window should be placed in the cathedral to his memory. The new Cathedral Board has now completed arrangements for the purchase from Mr J.M. Shapiro of  magnificent stained glass windows.

The five windows will be placed in one group, with that depicting the Good Shepherd in the centre.

The windows are beautiful works of art, and the light and shade effects obtained are really wonderful. The representations of the Christ and the four disciples are of life size, and the colouring and meticulous attention to detail must command the highest admiration. The general effect is most harmonious. Mr Shapiro confidently asserts that there is nothing comparable to these windows as works of art in Australasia.

Connoisseurs who have had the opportunity of seeing them have accorded them very high praise.

The apathy of citizens generally towards their privileges as voters on the municipal roll was discussed by councillors at the meeting of the new council last night.

Cr Gilkison introduced the matter by complaining of the state of the rolls, and suggesting that a commencement be made at once to have more citizens enrolled.

He proposed that copies of the roll with forms for enrolment be deposited at various central and conspicuous points.

Cr Scott andothers bore testimony to the extraordinary carelessness and uncertainty of citizens about this matter.

Many people who were perfectly positive that they had voted at the previous election could not possibly have done so, for the simple reason that their names did not appear on the then current roll. Cr Taverner said that of 6000 people written to warning them that their names had been struck off the roll only 400 took the trouble to reply.

Mr Lewin referred to the fact that a very large proportion of the people who were sufficiently keen to have their names placed on the supplementary roll had yet lost their interest when the day came, and did not vote.

The general feeling of councillors was that no matter what steps were taken to get a complete roll there would always be a great number of people who would disfranchise themselves by their own carelessness and indifference.