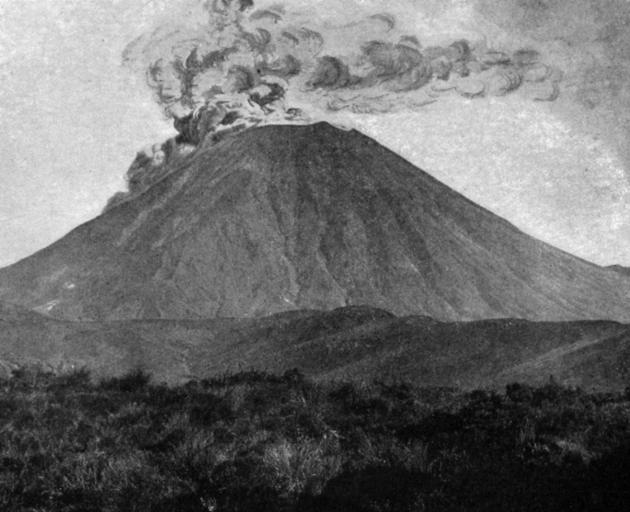 Mt Ngauruhoe has erupted violently several times since the beginning of the month, ejecting boulders and lava. - Otago Witness, 14.11.1917
On Friday a party, consisting of Messrs W. Salt (Wanganui), W. P. Mead (Taumarunui), and Bourne (Auckland), made an ascent of Ngauruhoe, and had a most interesting climb.

The party got away at an early hour, and ascended the mountain, during which time several shots were sent up. They went half-way up, and, as it was considered dangerous to proceed any farther, they reconnoitred in the vicinity and found red-hot lava and rocks 3ft through lying around.

On descending, they found that some of the rocks thrown out by the volcano had reached the plains, and the grass had been burned and scorched in consequence. When the party arrived at the accommodation house a most beautiful shot was sent up.

Rocks, steam, etc., were thrown up to a distance of fully 600ft above the crater. The white-hot mass appeared to hang in the air for a second or two, sparkling and burning, then it fell with a thunderous roar to earth.

Mr Salt, who has had a great deal of experience with the three mountains in New Zealand's wonderful National Park, expressed the opinion that a new crater had been formed in Ngauruhoe further to the northward.

A family which has a striking record in connection with the New Zealand Expeditionary Force is that of Mrs Ryan, of South Dunedin, an aunt of Mrs T. Rutherford, Invercargill. Mrs Ryan has seven sons, all of whom are in khaki. Private James Ryan and Private William Ryan enlisted in the Main Body, and have been through all the fighting without mishap. Private Thomas P. Ryan enlisted with the 12th Reinforcements, Private Jack Ryan with the 23rd, Private Timothy Ryan with the 25th, and Private J. L. Ryan with the 34th. The seventh son, Gunner Cyril Ryan, is with the Garrison Artillery at Dunedin Heads.

The old Victorian convict ship Success, after voyaging round the world from Melbourne, where she was bought for ''show'' purposes, has turned up at Louisville (United States), and news was received in Sydney last week that she is to be commissioned for sea again. On account of the scarcity of tonnage for deep-sea carrying trade, a shipping firm has bought her, and plans to turn her into a cargo vessel. The old craft, which was on exhibition in Sydney Harbour some years ago, was built more than 80 years ago. With the cells removed, it is expected the ship can carry 750,000ft of lumber, and the new owners are fitting her out for that trade. The Success is one of the few sailing vessels in the world made of solid teak, and her hull is said to be wonderfully well preserved. The Success will be remembered as a feature at the Panama-Pacific Exposition.

While the veteran cricketer C. G. Wilson was passing his Saturday afternoon in Wellington hitting good bowling for fours and sixes, he lifted one ball out of the ground and sent it into the Caledonian Hotel, through the dining-room window. The dining room was locked, and a search had to be made for the person holding the key. When the room was opened (says the Dominion) the ball could not be found till someone, looking in from the footway, noticed it tucked in between two of the laths of venetian blind.