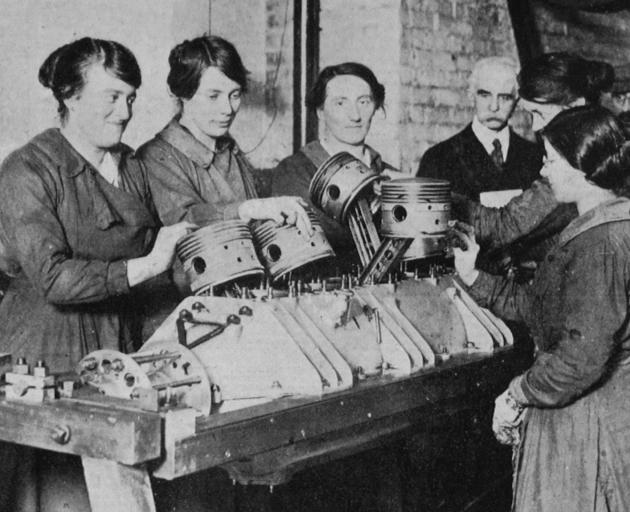 Women workers being taught engine-stripping work on a Fiat 250 h.p. aero engine at a technical school in Birmingham. - Otago Witness, 19.6.1918.
A grim story is told of the destruction of one of Germany's most recent U boats. Which was one of the last to leave Zeebrugge before that port was bottled up.

Out of a crew of 40, only two survived, after a terrible struggle with death for 90 minutes 20 fathoms below the surface, where the vessel foundered after striking a mine. A number of the crew committed suicide, believing they had no chance of leaving the submarine alive. The commander was one of the most experienced in the German submarine service. The explosion caused by the mine threw the U boat's delicate machinery out of gear, and a portion of the vessel was plunged in darkness. The engineer succeeded in putting the submarine in a horizontal position and prevented her turning turtle.Water poured in aft. An attempt to ``blow out'' the tanks proved unsuccessful, and the vessel would not rise to the surface. The inrush of water increased, and the only chance of escaping was to force open the conning tower and the forward hatches, and trust to the compressed air driving each man torpedo-like to the surface. The effort to open one of the torpedo hatches proved futile, the outside pressure being too great. The water mounted higher and higher, creeping up the men's legs. The sea water, mixing with the chemicals in the accumulators, created poisonous gas, and the crew were faced with suffocation. Conditions became so terrible that some of the men began to lose their reason, and threw themselves headlong into the water to die. One tried to shoot himself, but his revolver missed fire, and he also jumped into the water at the bottom of the vessel.

After superhuman efforts the forward hatch of the conning tower was forced open and those still alive escaped through the hatch. As they reached the surface the compressed air in their lungs burst their lungs, and 20 of them sank with blood-curdling yells. A British trawler picked up the two survivors.

An exceedingly graceful action by a number of her neighbours has earned the gratitude of Mrs Forbes Gilmore, who lives at No. 21 Hastings street, Kaikorai. This lady's husband has been on active service for about two years and a-half, and some weeks ago Mrs Gilmore broke down in health and had to leave her home for an extended holiday and rest. When she returned a few days ago she found that during her absence the place had been taken care of by her neighbours, who had apparently formed themselves into a working bee and had kept the hedges trimmed, the lawns cut, and the garden in order generally - a task which involved no small amount of work, as the section is half an acre.

A Taranaki soldier writes from Palestine: ``I am keeping very fit and have broadened out, but am getting grey. This is not be be wondered at, as a chap gets some decent frights here, such as shells passing so close that the rush of air blows your hat off, and incidentally makes your hair stand on end. But Jacko has something better than that, and it is a fair `snorter' - the aeroplane bomb. This is the true invention of the devil, and nothing can dispute the claim, and it will turn black hair white in half a minute. You can hear them coming, but it is no use running away from them.'' - ODT, 19.6.1918.