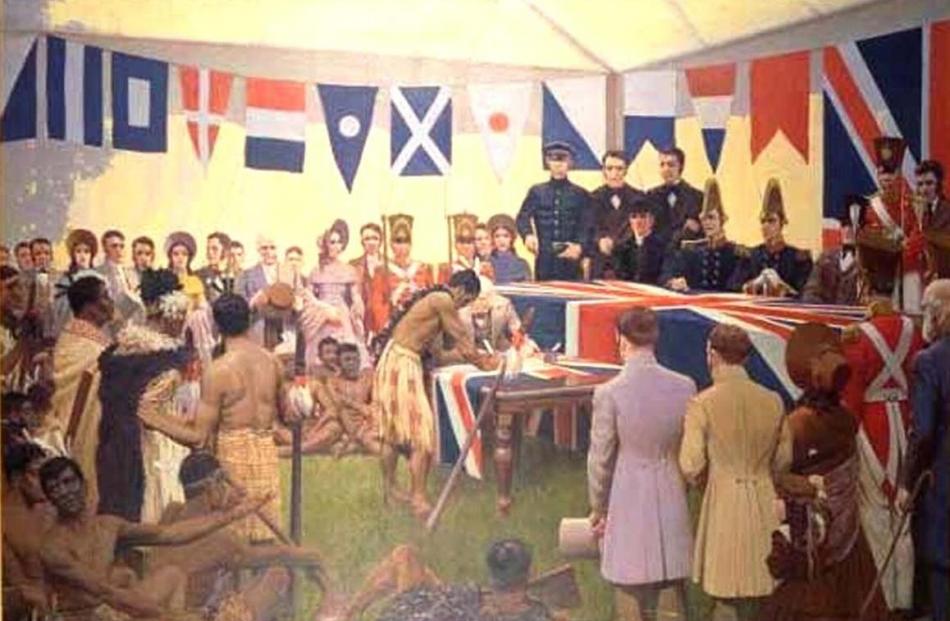 A reconstruction of the signing of the Treaty of Waitangi by Marcus King, painted nearly 100 years later. Photo by Wikimedia Commons.

Malcolm Falloon considers the spiritual dimension of the Treaty of Waitangi.

What is the "spirit'' of the Treaty of Waitangi?

Often discussion of this question is focused exclusively on the text of the treaty itself.

But it is also helpful to consider the wider ceremonial context in which the treaty was first enacted.

In considering the treaty's spiritual significance, I would like to highlight three features of its signing: Hobson's greeting; Patuone's gift; and the distribution of treaty blankets.

As each rangatira signed the treaty, Governor Hobson shook their hand and said, "He iwi tahi tatou'' (We are one people).

This whakatauka (significant saying) apparently delighted Maori but what would they have understood by it?

In the first instance, Maori would have recognised a confirmation of Henry Williams' explanation.

Williams, the leading Anglican missionary, had told them that by signing, "they would become one people with the English. Under one Sovereign, one Law, human and divine.''

But for many Maori, the words would also have resonated deeply with the Bible: "For he is our peace, having made both [Jew and Gentile] into one.'' (Ephesians 2:14).

Hobson's greeting linked the sacred and the secular in a way that would have made perfect sense to Maori of the day.

After the signing, Patuone, a leading Nga Puhi rangatira and peacemaker, stepped forward and presented Hobson with a mere pounamu (a greenstone hand weapon) intended expressly for Queen "Wikitoria''.

Mathew Felton, a member of Hobson's entourage and the one who reported the gift, recognised the value of such a rare taonga, but seemed unaware of its deeper significance.

Rangatira who wished to make peace with an enemy would send their mere pounamu to their opponent, who, by accepting it, would establish an enduring peace.

Consequently, the 500 or so Maori who gathered to witness the signing would not have missed the significance of Patuone's gift.

If the act of signing the treaty sealed the agreement from a British standpoint, the presentation of the mere pounamu by Patuone was its cultural equivalent from a Maori perspective.

It was a fitting response to Hobson's greeting and linked the treaty to traditional practices of peacemaking.

At the end of the ceremony, Hobson asked missionary printer William Colenso to distribute a bale of blankets and a cask of tobacco to all those who signed.

It was an exchange viewed with cynicism by later generations of settlers, who resented what they called the "blanket treaty''.

Yet to see this distribution as merely a bribe to "naked savages'' is to be insensitive to the cultural protocols involved.

Hobson, with his western sensibilities, had been careful to withhold any gifts until the ceremony was completed, and yet, to have not offered a koha would have been interpreted as a deliberate insult within a culture that placed such importance on reciprocity and hospitality.

In later years, the red treaty blankets were worn as a mark of distinction by Maori rangatira in much the same way that the grey missionary blanket had earlier demonstrated a willingness to hear the missionary karakia.

For Maori, what you wore was an important indication of your beliefs and allegiances.

"Give me a blanket that I might believe!'' was perplexing to the missionary who was looking for an inward conversion of the heart but it reminds us that for a number of early converts the social expression of faith was just as important as its profession; how can you believe if disconnected from the community of faith by your very appearance?

Hence, Maori enthusiasm for treaty blankets was not a sign of short-sighted avarice, but of a newly-formed allegiance and a continuing recognition of the agreement.

If the spiritual dimension of the treaty was important to all those involved in its first signing, it continues to enrich our understanding of the document even in this secularising age.

For just as a marriage licence cannot fully express the intentions of the happy couple, the "spirit'' of the treaty cannot be confined to the legal dissection of written texts, however important that may be.

The first Maori Anglican Bishop, Fredrick Bennett, in urging New Zealanders never to forget the treaty's spiritual side, defined that spirit as "unity and peace between the Pakeha and Maori for all time''.

His definition follows naturally as a succinct summary of Hobson's greeting and Patuone's gift.

And as we heed the Bishop's call, may we as a nation continue to cloak our life together in the spiritual blanket that is the Treaty of Waitangi.

● The Rev Malcolm Falloon is priest in charge at St Luke's Anglican Church, Mosgiel. He is also a doctoral student in the University of Otago theology and religion department, studying the early missionaries to New Zealand and the conversion of Maori to Christianity.